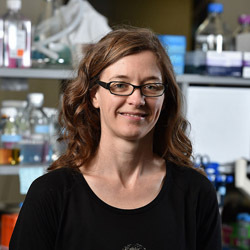 A new study led by Elizabeth Archie, Clare Boothe Luce Assistant Professor of Biology at the University of Notre Dame, has found that social interactions have direct effects on the gut microbiome.

Archie points out that most, if not all, animals have a gut microbiome — an incredibly diverse “rainforest” of bacteria that lives in the intestine and helps animals digest food, make vitamins and fight disease.

The study revealed that baboons that had closer social bonds had more similar gut bacteria than animals with weaker social ties.

“In the last few years, scientists have seen some hints that social relationships can shape gut bacterial communities,” Archie said. “For instance, we know that people who live in the same house have more similar gut bacteria than people who live in different houses. However, such studies haven’t been able to get at the processes that drive these effects.

“In our study, we were able to show that physical contact between animals — measured by how much different baboons groomed each other — determined whether they had similar gut microbes. We were able to exclude alternative explanations such as that baboons who are close friends might also eat similar diets, or might be genetic relatives, or spend a lot of time in the same environment, all things that can also influence the gut microbiome. Instead, we found that physical contact was the most important force shaping the gut microbiome in baboons.”

The study was conducted at the Amboseli Baboon Research Project (ABRP), a long-term study of wild baboons in Kenya. ABRP is directed by Susan Alberts and Jenny Tung of Duke University, Jeanne Altmann of Princeton University, and Archie. Since 1971, this project has followed the lives of hundreds of wild baboons, giving the researchers very detailed data on the animals’ social relationships, diets, habitats and genetic relationships. To measure the baboons’ social relationships, researchers with the ABRP watched them for a year, recording data any time two baboons groomed each other. During grooming, the animals comb through each other’s fur, pulling off dirt, parasites, and dead skin, and sometimes they eat what they find. This behavior is probably important in bacterial transmission.

“To measure the microbiome, we collaborated with Ran Blekhman of the University of Minnesota and Luis Barriero of the University of Montreal,” Archie said. “Specifically, we collected fecal samples from known baboons. We then extracted DNA from these samples; 99 percent of the DNA in a fecal sample comes from bacteria. We then used new genomic tools to identify what bacterial species were found in each baboon.”

Although the study was conducted in wild baboons, the results have potential relevance for the human gut microbiome.

“Social relationships, especially social contacts, are probably also important in transmitting human gut microbes,” Archie said. “This means that the people you touch the most, significant others, children, friends, are sources of bacteria that could shape your microbiome and perhaps influence how it works.”

The results of the study raise the question: are socially transmitted microbes a good thing or a bad thing?

“We already know that social relationships are important in disease transmission,” Archie said. “For instance, if you come down with the flu, you probably got it from a family member or co-worker. Our results suggest that good bacteria also travel along social networks. Hence, social relationships might grant individuals access to good microbes that could improve gut health and functioning. As a next step, we’re trying to look at whether socially-transmitted microbes are largely good or bad for their hosts.”

The results of the study are described in a paper appearing in the journal eLife.

Originally published by William G. Gilroy at news.nd.edu on March 16, 2015.