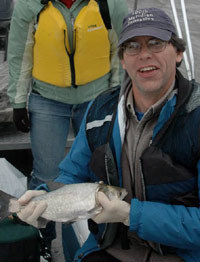 The National Oceanic and Atmospheric Administration (NOAA) has awarded $2.5 million to the University of Notre Dame and its partners to predict the next wave of invasive species likely to enter the Great Lakes and to identify cost-effective countermeasures.

David M. Lodge, professor of biological sciences at Notre Dame and director of its Center for Aquatic Conservation, will serve as principal investigator for the project. He served as the first chair of the National Invasive Species Advisory Committee and was the lead author of the Ecological Society of America’s paper calling for a stronger government response to the problem of invasive species.

In making their predictions about which species are likely to invade, Lodge and his team of researchers will consider such factors as the most likely paths of introduction and spread and the availability of suitable habitat across the Great Lakes.

The Asian carp invasion will play a role in the study. A bighead carp was captured in Lake Calumet, Ill., on June 22, the first capture of a live Asian carp between the electrical barrier in the Chicago Area Waterway System and Lake Michigan. The capture confirmed the presence of live Asian carp with unimpeded access to Lake Michigan and validates earlier discoveries of environmental DNA (Edna) of Asian carp, which indicated the fish were nearby.

The Edna (DNA in microscopic bits of tissue) shed from the fish was discovered by a research group led by Lodge and Notre Dame biologists Andrew Mahon and Christopher Jerde and Lindsay Chadderton of The Nature Conservancy.