University of Notre Dame astronomer Timothy Beers and his Galactic Archaeology group, which includes Notre Dame astronomers Daniela Carollo and Vinicius Placco,  have led an international team of researchers that have produced the first chronographic (age) map of the halo of the Milky Way galaxy. Using a sample of 4,700 blue horizontal-branch (BHB) stars from the Sloan Digital Sky Survey, they have shown that the oldest stars are concentrated in the central region of the Galaxy, confirming predictions from numerical simulations of galaxy assembly.  Chronographic maps such as theirs can also be used to identify complex structures of stars still in the process of being added to the halo system. Their findings were published in the Astrophysics Journal Letters recently. 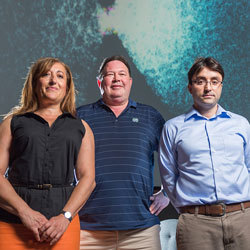 Stars such as our Sun will eventually exhaust the supply of hydrogen in their cores, and evolve into stars that are sufficiently hot to burn helium during the last billion years of their lifetimes. The astronomers have used the colors of such helium-burning stars, called BHB stars, to produce the age map. The colors of BHB stars are related to their core masses, which correlate with their ages. Using spectroscopic data collected during the Sloan Digital Sky Survey, the astronomers determined the properties that distinguish the BHB stars from other similar objects, allowing them to form a relatively pure sample from which to create the age map. 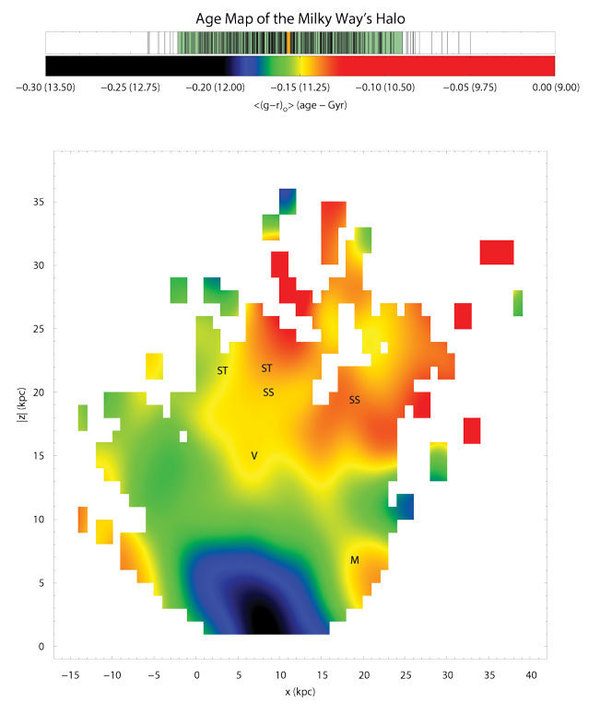 The astronomers’ findings have led to two important new insights: The oldest stars in the Milky Way are concentrated towards the center of the Galaxy, and, that by resolving the ages of the debris from the destruction of smaller (dwarf) galaxies that are being added to our galaxy, they can dramatically improve searches for new debris streams based on their contrast in age, rather than number density on the sky, which is a far less sensitive approach. This makes the history of the assembly of our Galaxy much clearer than previously possible. “Surprisingly, the region of the oldest stars extends all the way to the volume of the halo close to the Sun. This ancient chronographic sphere can now be explored in order to study the properties of the old stars, which will tell us about the chemistry of the early Universe,” said Beers.

“Our location in the midst of the oldest stars found in the Galaxy means that we will be able to tell the story of the how our halo formed much more completely than was previously thought possible,”  said Beers. The chronographic map they have created will enable future critical tests of hierarchical galaxy formation models and the physical properties of the first stars born in the Universe.

Beers’ Galactic Archaeology group at Notre Dame is now preparing a much more extensive age map of the Galactic halo based on hundreds of thousands of BHB stars, also from the Sloan survey. Their next detailed map will serve as a guide for astronomers to identify numerous new dwarf galaxy debris signatures and enable a refined history of the assembly of the Milky Way. Astronomers will also use their new technique to study other large samples of BHB stars collected through other sky surveys now being carried out, as well as in the near future with the Large Synoptic Survey Telescope (LSST), now under construction in Chile.

Beers, Carollo, and Placco are available to speak about their research to alumni clubs across the country.