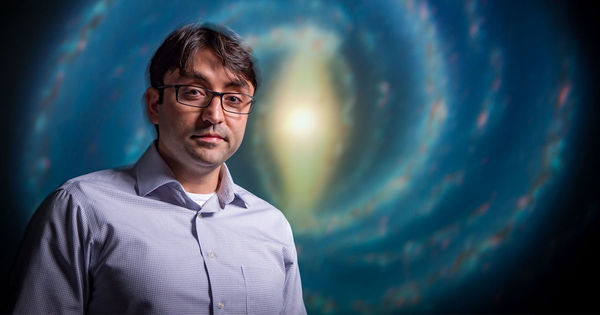 Vinicius Placco, a research assistant professor of astrophysics at Notre Dame, collaborated with colleagues at the Harvard-Smithsonian Center for Astrophysics to confirm that a massive amount of energy seen 2 billion light years from Earth stems from the collision of two galaxy clusters at the site of a giant black hole.

Placco’s work is published today in the inaugural edition of Nature Astronomy. The paper’s findings detail matter ejected by a black hole being swept into the merger of two galaxy clusters.

The black hole in one galaxy cluster shoots away much of the gas flowing toward it. The fast-moving particles receive a boost of energy from the galaxy cluster collision, creating shock waves.

Placco was able to measure the spectrum of light coming from the galaxy harboring the super-massive black hole, to prove that it belongs to the galaxy cluster pair Abell 3411-12. That was used with other data collected from NASA’s Chandra X-Ray Observatory, the Giant Metrewave Radio Telescope in India, and the Keck Observatory and Japan’s Subaru telescope, both on Mauna Kea, Hawaii.

Placco and Rafael Santucci, a graduate student at Universidade de São Paulo, Brazil, were awarded time on the Southern Astrophysical Research (SOAR) Telescope in Chile and were making remote observations from South Bend and São Paulo. A friend from his undergraduate years at Universidade de São Paulo, Felipe Andrade-Santos, who now is a post-doctoral research fellow at Harvard, asked Placco if he would use some of his time on the telescope to observe a galaxy in the direction of the Abell 3411 and Abell 3412 galaxy clusters.

“It can take six months to a year to get time on the telescope, and this would delay the research considerably. Since we were at the telescope, we could help the Harvard team confirm what they were expecting to see,” Placco said. “We were in the right place at the right time with the right expertise.”

Placco said it is satisfying to know that he was able to help as part of one piece of a puzzle that connected researchers on several continents and countries.

“This is what makes science interesting and appealing,” Placco said. “All of these collaborators, even though they are not in the same place all the time, they know they can count on each other and work together.”