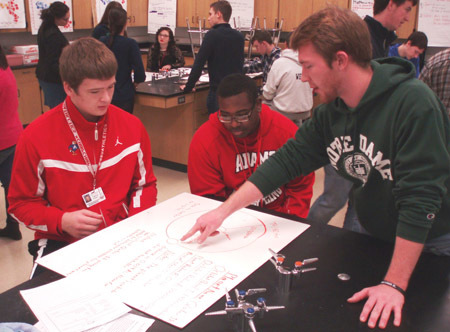 A Masterclass collaboration between the Department of Physics and John Adams High School in South Bend has accelerated student interest in physics – nearly 50 students signed up for astronomy teacher Daniel Walsh’s class this year, up from 11 in last year’s class when the program first started at John Adams.

Notre Dame physics professor Arielle Phillips, postdoctoral associate Patrick O’Malley, graduate student Bryant Vande Kolk, and several undergraduates, including Erin Penicka from the College of Science, visited Walsh’s classroom in early December as part of an intense two-week study. The high school students learned how to analyze data on citizen science websites in search of habitable exoplanets. “We actually teach the kids some astronomical techniques on finding exoplanets from outside of our solar system,” he says.

A committee in the Department of Physics, with representatives of different outreach groups including QuarkNet and JINA, meets every other week to discuss potential collaborations and opportunities for K-12 students.  Phillips developed the astrophysics program with Ken Cecire, an education specialist at Quarknet who previously developed a Masterclass focused on high-energy physics; Tom Loughran, a professional specialist in Physics; and graduate students Ali Snedden and Colin McClelland. “The Astro Masterclass uses the model developed for International Masterclasses in particle physics to which Notre Dame and QuarkNet are key contributors,” Cecire says.

The first Astro Masterclass was a daylong event in 2011 that brought students to campus. Organizers have also taken the program to Aaron McNeely’s class at Bremen High School for the last two years. In addition to exoplanets, the group hopes to develop classes for other topics and to reach more schools, with experienced teachers helping to train new ones.

The class exposes students to real scientists as well as real science. “Part of the experience is getting to know how to become an astrophysicist and how to be a physicist,” Phillips says. “That’s part of the idea of Masterclass – students get contact with people who are doing the research. They’re immersed in the scientific process.”