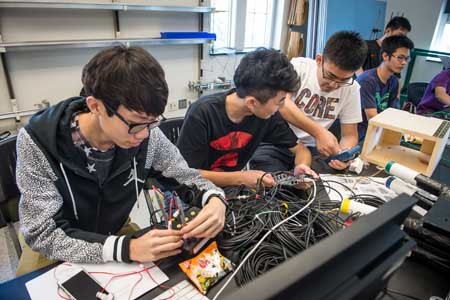 The idea for iSPI stemmed from the International Leadership, Enrichment, and Development (iLED) program hosted annually by Notre Dame International. Each summer, iLED features activities on particle physics that are based on the curriculum for high school students at the Notre Dame QuarkNet Center.  Feedback from previous iLED students was positive, so iSPI was created to provide a summer experience for students interested in physics.

The iSPI students are learning about the field of particle physics using real data from the Large Hadron Collider, the largest particle accelerator in the world at the European Organization for Nuclear Research in Switzerland.  The institute includes classes, laboratories, discussions, and tours of Notre Dame’s FN Tandem Van De Graff Accelerator in Nieuwland Science Hall, as well as Fermilab National Laboratory, the country’s premier particle physics institution, outside of Chicago. Social activities are organized after classes, including museum tours, game and movie nights, and a weekend trip to Chicago. The summer program will conclude with final presentations from the students on August 7. 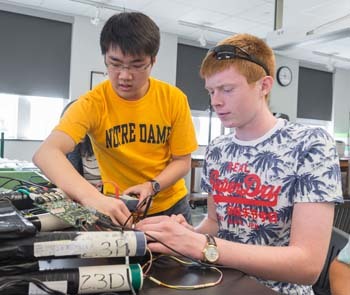 The goal of the institute is for the participants to gain an understanding of elements of the Standard Model and use their new knowledge to explain physical phenomena at the smallest scale. In addition, the iSPI participants are enhancing their abilities to think scientifically, gaining a glimpse of studying at Notre Dame and in the United States, and forming a network of colleagues and mentors who share their excitement for physics.

“The feedback from the students has been very positive,” said Mitch Wayne, professor of physics. “To quote one of the students I spoke with this week, ‘The program has been great, and in fact, has provided many more activities and experiences than I expected.’”

The iSPI program is hosted by the Department of Physics and QuarkNet Center at Notre Dame, and is sponsored by Notre Dame International.