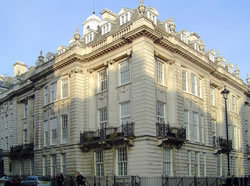 The University of Notre Dame London Centre hosted a Workshop on Biomedical Modeling held on July 18–19, 2011, gathering researchers in biomedical engineering and mathematical and computational biology from the United States and the United Kingdom for discussions of possible future collaboration. The Interdisciplinary Center for the Study of Biocomplexity (ICSB) and Department of Applied and Computational Mathematics and Statistics (ACMS) from Notre Dame and the Centre for Mathematical Biology and the Oxford Centre for Collaborative Applied Mathematics from the University of Oxford organized the event.

The event was the 10th Workshop and the first away from the Notre Dame campus. It included biomedical topics such as biomechanics, including adaption or response of tissues to mechanical, chemical, or electromagnetic stimuli; blood clot formation; and global warming and spread of diseases. Extended discussions followed each of the 17 talks, and participants networked at lunches and a reception.

Nicolas Smith, head of the Department of Biomedical Engineering at King’s College London, C. Ross Ethier, head of the Department of Bioengineering at Imperial College London; and Alain Goriely, director of the Oxford Centre for Collaborative Applied Mathematics were among the leading researchers who spoke. Participants received a booklet of workshop presentations and posters. Springer will publish a special issue of the Bulletin of Mathematical Biology with material from the event.

Notre Dame participants visited other schools to discuss possible collaborations and give talks after the Workshop. Glen Niebur and Diane Wagner went to the Department of Bioengineering at Imperial College, Mark Alber to the Department of Chemical Engineering at Imperial College, and Arezoo Ardekani to the Theoretical Condensed Matter Physics Department and Oxford Center for Soft and Biological Matter at Oxford University.

The College of Science’s Rev. Julius A. Niewland Lecture Series and the College of Engineering sponsored the event. The workshop started with a description of different new interdisciplinary initiatives at Notre Dame, and participants received material about the College of Science, ACMS and several graduate programs. Faculty and students from ACMS, which formed last year to expand Notre Dame’s research and educational programs that use mathematical, computational and statistical modeling, collaborate regularly with colleagues in an array of disciplines around the globe.