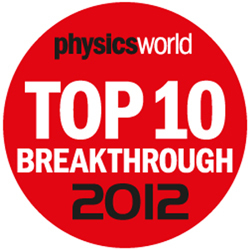 University of Notre Dame researchers were involved in two of the Top Ten Breakthroughs of 2012 announced today by Physics World magazine. The Higgs-like boson discovery was No. 1 on the list, and the BaBar experiment, the first direct observation of time reversal violation, was No. 3.

“The B0 Meson System is a class of particles that are known to exhibit violations of the fundamental symmetries of nature,” LoSecco says. “In the experiment, one can look at states of definite ‘flavor’ or states of definite ‘CP’ properties. Since these can be easily distinguished, one can compare the forward flow of time, starting as a well-defined ‘flavor’ state and ending in a well-defined ‘CP’ state, with the backward flow of time in which the initial ‘CP’ state and the final ‘flavor’ state are reversed in time. The two rates have been measured to be different by 14 standard deviations, which is highly significant. These observations are the first direct observation of time reversal violation through the exchange of initial and final states in transitions that can only be connected by a time-symmetry transformation.”

Physics World reviewed more than 350 of the articles that it published in 2012 to select the breakthroughs, based on the fundamental importance of the research, the significant advance in knowledge it provided, its strong connection between theory and experiment and its general interest to all physicists. Other cited research involved Majorana fermions, particles that are their own antiparticles; galaxy-cluster motion; viewing fluorescent objects behind opaque barriers; the first maser that operates at room temperature; measuring the tiny amount of heat released when an individual bit of data is erased; a new technique for entangling photons using orbital angular momentum; the first demonstration of communications using neutrinos; and a new system that converts kinetic energy into chemical energy in a single step.

Originally published by Gene Stowe at newsinfo.nd.edu on December 14, 2012.