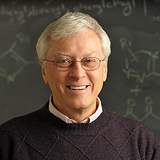 Marvin Miller, Ph.D. has been selected for induction into the American Chemical Society (ACS) Division of Medicinal Chemistry (MEDI) Hall of Fame during the ACS 252nd National Meeting and Exposition in Philadelphia in late August.

For nearly 40 years, Professor Miller has made countless contributions to medicinal chemistry, focusing on a mixture of synthetic organic chemistry and bioorganic chemistry to develop new methods in an effort to study, prevent, and cure disease, in particular tuberculosis and bacterial infections.

Professor Miller has over 300 peer reviewed publications and more than 25 US patents. A popular lecturer across the country and around the world, he has mentored more than 80 graduate students and 70 postdoctoral researchers and visiting scientists. On nominating Miller, Shahriar Mobashery, Ph.D., the Navari Family Professor of Life Sciences at Notre Dame, wrote, “His service to the profession, his membership on a number of editorial advisory boards and grant review panels and popularity as a consultant worldwide, and his reputation for superb training and placement of lab workers has been remarkable. His chemistry is noted for being innovative, yet practical and reproducible.”

Mobashery’s sentiments were echoed by John Macor, Ph.D., Executive Director Immunoscience Discovery Chemistry, Bristol Myers Squibb, who wrote about Miller, “His commitment to both research in organic and medicinal chemistry, coupled with his devotion to training the next generation of organic and medicinal chemists makes him the ideal candidate for the MEDI Hall of Fame.”

Befittingly, two of Miller’s former students have also been inducted into MEDI Hall of Fame: Macor was previously inducted in 2014 and Ann Weber was inducted along with Miller in 2016, a testament not only to Miller’s own contributions to chemistry, but the lasting impact he has made on subsequent generations of chemists as well.