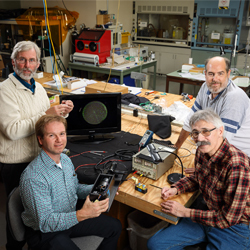 A team from the Notre Dame QuarkNet Center including two high school teachers and a high school student will travel to CERN in Geneva, Switzerland in mid-November to install a small, fiber-optic particle detector in the Large Hadron Collider. This type of detector, created at Notre Dame in the early 1980s and upgraded in the late 1990s by Randy Ruchti, professor of physics, and the late Barry Baumbaugh, professional specialist, uses a fiber optic plate, converting energy to light, and image intensification to make collisions visible to the human eye. A video camera will capture lead ions traveling through the equipment at near the speed of light and smashing into nuclei.

“You’ll be able to literally see with your eye nuclear interactions,” says Dan Karmgard, research assistant professor of physics, who will lead the team to CERN. “You will see lead ions flying into this thing and smack into a nucleus in the fiber optic plate and shatter it. There will be all kinds of stuff flying out. The movies will be available for anyone who wants to actually watch a nuclear reaction with their eyes.”

The detector, about four square centimeters on its face and two centimeters deep, will be installed in a CERN heavy-ion beam line on Nov. 17, 2016, when the LHC will be starting its annual switch from proton-proton collisions to heavy ion collisions. The detector will remain operational for eight hours in the beam. The teachers and student plan to communicate with their classes during this time, and they will gather data about the number, frequency, characteristics, and effects of the collisions.

The team includes teacher Brian Dolezal of St. Joseph High School in South Bend, teacher John Taylor of Elkhart Memorial High School, and student James Twaddle of Marian High School in Mishawaka, who assembled the detector with Ruchti and Karmgard and technicians Mark Vigneault and Michael McKenna at the QuarkNet Center in South Bend. Ruchti proposed the trip when U.S. CMS Education and Outreach Coordinator Don Lincoln, a guest professor in high energy physics at Notre Dame, sought ideas for boosting connections between the Compact Muon Solenoid, one of two large experiments at CERN, and the broader community. QuarkNet also contributed to the group’s travel expenses.

Ruchti, who founded the Notre Dame QuarkNet Center in 1999 and who has used such a detector for public lectures for years, said teachers could use the equipment in their classrooms where it would show the frequent passing of cosmic ray muons. Next summer, it would be used to detect other particles at the Fermi National Laboratory near Chicago. An early version of the detector has operated since 2001 at the Smithsonian National Air and Space Museum in Washington.

High energy physics research and QuarkNet education and outreach are made possible through support from the National Science Foundation and the University of Notre Dame.