A new study by University of Notre Dame researchers into the way nerve fibers enter the wall of the spinal cord during early development in zebrafish could potentially lead to regenerative therapies for people with brachial plexus injuries — those that are caused by damage to the network of nerves in the neck and shoulder. 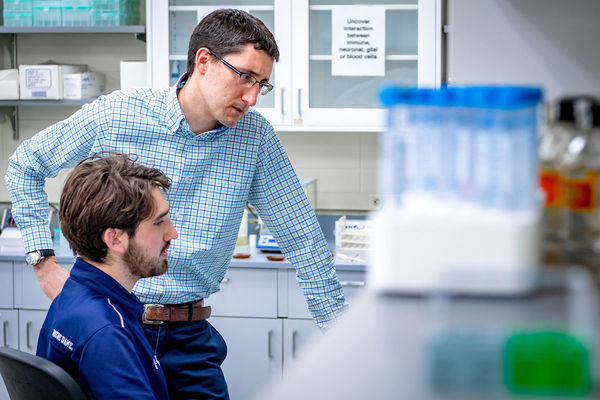 Injuries, though, weren’t necessarily on senior Evan Nichols’s mind when he began working with Cody J. Smith, the Elizabeth and Michael Gallagher Assistant Professor of Biological Sciences, on a basic science question. Nichols, a neuroscience and behavior major, wanted to discover how nerve fibers, known as axons, navigate into the spinal cord during early development. Those nerves send messages from your fingertips, helping you determine whether an object is boiling hot or freezing cold. And if those nerves are stretched or compressed or even torn, this brachial plexus injury may cause permanent damage and loss of function.

Their resulting paper, “Pioneer axons employ Cajal’s battering ram to enter the spinal cord,” published February 4, 2019 in Nature Communications, determined that an “old” hypothesis, developed in the early 20th century and mostly dismissed by modern scientists, may be the first method by which axons enter the spinal cord.

Using zebrafish larvae, Nichols and Smith evaluated two hypotheses. For several years, scientists thought that one specific type of cell, called a boundary cap cell, was the driving force behind moving axons into the spinal cord, Nichols said. Because their data was inconsistent with that, the researchers looked back at the ideas put forth by Ramón y Cajal, a pioneer in modern cellular neuroscience. Cajal suggested that axons used a “battering ram” approach during early development that breaks a hole in the spinal cord wall.

“We went back and tested the hypothesis from Cajal, and it turned out he was actually correct,” Nichols said. The results were surprising because this particular hypothesis of Cajal’s was widely dismissed by the boundary cap hypothesis.

The research they completed shows that both hypotheses work in succession, because the axons first break into the spinal cord wall using the battering ram approach, and boundary cap cells serve like a bridge for other axons to travel into the wall during the second round. Knowing this order could be important when designing strategies to repair it after injury.

Nichols, who has already published two papers as the first author as an undergraduate, and has three more in the pipeline, enjoys doing foundational research. So he was pleasantly surprised that this research answered questions that may someday help his brother, who was born with a brachial plexus injury. “It’s very humbling to be part of this research that I can relate to my own life, and to my brother,” he said.

Smith didn’t embark upon the study with the intent of providing medical solutions, he said.

“We went into this research interested in the basic science; how do these axons enter the wall of the spinal cord?” Smith said. “But this is a lesson for the general public, because sometimes basic science can lead to discoveries that are completely unexpected, but that have a potential and exciting benefit.”

This study was supported by Notre Dame’s Freimann Life Sciences Center and the Center for Stem Cells and Regenerative Medicine. Funding for this research was provided by the Alfred B. Sloan Foundation Fellowship of Neuroscience.