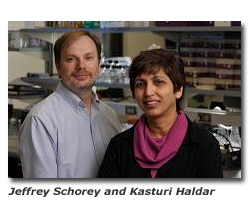 Haldar’s and Schorey’s projects are two of 81 grants announced by the Gates Foundation in the second round of the Grand Challenges Explorations, an initiative to help scientists around the world explore bold and largely unproven ways to improve health in developing countries. The grants were provided to scientists in 17 countries on six continents.

To receive funding, Haldar and Schorey showed in two-page applications how their ideas fall outside current scientific paradigms and might lead to significant advances in global health. The five-year, $100 million initiative is highly competitive, receiving more then 3,000 proposals in this round.

Haldar’s research is focused on novel malarial vaccine targets linked to cellular import. She points out that despite existing vaccine development programs and nearly half a century of research, an efficacious vaccine against malaria infection remains elusive. Despite sequencing of malaria parasite genomes, a major obstacle in the development of a malaria vaccine has been rational selection of parasite genes as vaccine targets. The parasite encodes for hundreds of hypothetical parasite genes whose function and requirement in infection remain poorly understood.

Schorey’s research will examine whether the development and use of entitles called exosomes, which previous studies have shown to play a role in immune surveillance, might provide a novel approach to developing a tuberculosis vaccine. Earlier work in his lab has shown that these exosomes, which are membrane vesicles, contain mycobacterial as well as host (human or mouse) components and can function to promote a robust immune response to Mycobacterium tuberculosis, the causative agent of tuberculosis. Exosomes alone could elicit this response indicating that they contained everything necessary to function as a vaccine. This suggests that exosome vaccines would not require an adjuvant: a major benefit of exosomes over other protein-based vaccines.

In the first phase of his Grand Challenges research, Schorey will use a mouse model to determine if these exosomes can protect the host against a M. tuberculosis infection and whether they provide better protection than existing tuberculosis vaccines. The long-term goal is to optimize these exosomes as TB vaccines and to develop methodology to produce sufficient quantities of exosomes for clinical testing.She will use the Grand Challenges grant to help prioritize rational development of novel malaria vaccine targets using rapid transgenic, cellular and nanotechnology approaches. In earlier work, she and her research team combined computational and cellular assays to predict fewer than 400 of more than 5,000 parasite genes likely to be high value drug and vaccine candidates. They subsequently applied genome scanning and genetic assays to define the functions of hypothetical genes and thus prioritized five targets. In the next phase, she expects to further select one to two of these genes that show the greatest potential and develop them as novel vaccine targets, derived from genomics and effective against both major species of parasites that cause human malaria.

“The winners of these grants are doing truly exciting and innovative work,” sadi Tachi Yamada, president of the Gates Foundation Global Health Program. “I’m optimistic that some of these extraordinary projects will lead to life-saving breakthroughs for people in the world’s poorest countries.”