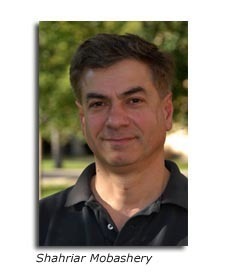 Ever since scientists determined about 50 years ago that the cell wall of bacteria consists of a mesh-like network called peptidoglycan, elucidating the structure of this  critically-important layer of the bacterial envelope has been the focus of intense study.

Those efforts to pin down the three-dimensional structure of peptidoglycan repeatedly ended in either frustrating failure or limited success.

But this week in a paper published in the Proceedings of the National Academy of Sciences, Notre Dame bioorganic chemist Shahriar Mobashery describes how he and his team were able to characterize for the first time the framework of peptidoglycan through a painstaking series of studies involving a 37-step synthetic procedure for the preparation of a fragment of the cell wall and its characterization to elucidate the structure.

The breakthrough gives scientists the means to understand with unprecedented clarity how the action of antibiotics like penicillin work to impair the structure of the cell wall.  Similarly, glycopeptide antibiotics such as vancomycin interact with the cell wall itself and this structural information provides an opportunity to understand their functions as well.

“Scientists have known how penicillin inhibits a specific enzyme in the biosynthesis of the bacterial cell wall,” Mobashery said. “Vancomycin which many describe as the drug of last resort for certain hard-to-treat bacterial infections works differently. Vancomycin binds to the cell wall itself. So it is clearly important to know how both of these antibiotics work in disrupting the function of peptidoglycan in maintaining the integrity of the cell wall.”

A full understanding of a whole array of complex chemical interactions will pave the way for newer classes of antibacterial agents. The chemical architecture of the next wave of antibacterial drugs cannot come soon enough, Mobashery noted, because the effectiveness of so many existing compounds have been compromised by overuse and misuse, the primary causes of drug resistance.

“Members of my lab have been working on various facets of bacterial cell wall in the past five years,” Mobashery said.

This breakthrough in synthesis of the fragment of cell wall was critically important, as earlier work by others to isolate bits and pieces of the cell wall from bacteria themselves proved to be difficult. “So they could never make enough of it and even then purity was sometimes an issue,” Mobashery said.

Having a three-dimensional image of the cell wall removes an important obstacle that has slowed the creation of a new class of compounds against drug-resistant bacteria.

Bacterial resistance spreads fast.  The Food and Drug Administration reported that methicillin, one of the strongest in the arsenal of drugs to treat staph infections, is no longer effective against some strains of staph bacteria and that even vancomycin "may be in danger of losing its effectiveness."

Some bacteria evolved to become resistant to penicillin, the miracle drug. Penicillin killed non-resistant bacteria, allowing "super" bacteria to flourish in the body.

The Centers for Disease Control and Prevention estimates that each year nearly 2 million patients in the United States get an infection in hospitals, and about 90,000 of these patients die as a result of their infection.