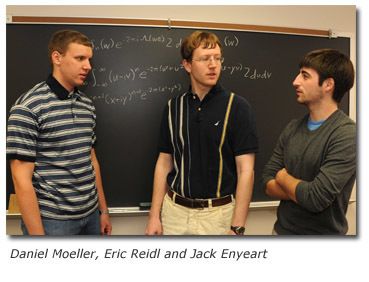 For the second year in a row, Notre Dame ranked 20 of 546 institutions participating in the 70th W.L. Putnam Mathematical Competition. Eight Notre Dame students scored in double digits in the challenging competition, administered by the Mathematical Association of America. Four placed in the top 12 percent and one, Eric Reidl, in the top two percent, with a score of 50. Median scores on the 12-question test – each worth 10 points – are usually in the low single digits.

Reidl, a senior math and piano performance double major who scored 11 on the six-hour test when he took it in his freshman year, will pursue a Ph.D. at Harvard University, probably in algebraic number theory. “I think competitions like the Putnam are a fun way to see my mathematical maturity increase,” he says.