The fellowship provides three years of support for the graduate education of students who have demonstrated the potential for significant achievements in science and engineering research.  Past NSF Fellows include individuals who have made significant breakthroughs in science and engineering research, as well as some who have been honored as Nobel laureates. 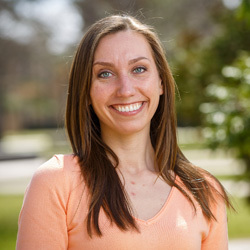 Bonnie Huge is a second year graduate student in the Department of Chemistry and Biochemistry. Working with Norman Dovichi, the Grace Rupley Professor of Chemistry and Biochemistry, she is developing instrumentation for high-throughput generation of affinity reagents. Affinity reagents bind to proteins with high specificity and selectivity, but their generation is typically time consuming and expensive. She has constructed an instrument that can be interfaced with either laser-induced fluorescence detection or an automated fraction collection stage to help generate and identify these reagents. Her goal is to adapt the instrument to separate complex protein mixtures to identify high affinity binders for each protein component within the mixture.  Huge earned her Bachelor of Arts in Chemistry with a minor in Mathematics from Indiana University – South Bend in 2010. 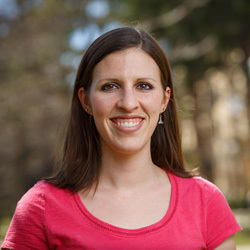 Elizabeth Loughran, a 2012 Notre Dame biochemistry alumna, is a second year graduate student in the Integrated Biomedical Sciences program. Her research focuses on age-related changes in the peritoneum, a translucent serous membrane that lines the inner walls of the abdominal cavity and its visceral organs. Peritoneal tissues are the major sites of ovarian cancer metastasis. Using mice as a model organism, Loughran’s research aims to identify and characterize age-related changes in healthy peritoneal tissues, with an emphasis on the extracellular matrix underlying the mesothelial sheet. She also seeks to determine how these changes affect intraperitoneal metastatic success of ovarian cancer. Loughran was previously mentored by Tracy Vargo-Gogla, adjunct assistant professor of chemistry and biological sciences, and now works with Sharon Stack, the Ann F. Dunne and Elizabeth Riley Director of the Harper Cancer Research Institute. 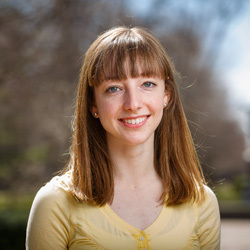 Senior biological sciences major Rebecca Marton was the only Notre Dame undergraduate to receive a graduate research fellowship this academic year. She has worked in the laboratory of David Hyde, The Rev. Howard J. Kenna, C.S.C., Memorial Director of the Zebrafish Research Center, since her sophomore year studying the migration of glial cells that play a role in retinal regeneration in adult zebrafish. In addition to her research on campus, Marton had the opportunity to spend the summer at Cold Spring Harbor Laboratory in New York in 2012 where she conducted an RNA interference screen in Caenorhabditis elegans developmental timing mutants to gain insight into the processes that coordinate developmental events.

Marton is the co-editor in chief of Scientia, Notre Dame’s undergraduate journal of scientific research, a role she has held for two years. In addition to earning this fellowship, she was awarded a prestigious Goldwater Scholarship last year.  Marton will attend Stanford University in the fall to pursue a Ph.D. in stem cell biology and regenerative medicine. 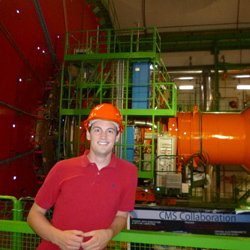 Kevin McDermott, a 2013 physics alumnus, is a current first year graduate student at Cornell University. During his time at Notre Dame, McDermott worked on two particle physics research projects related to ALICE (A Large Ion Collider Experiment) and the Compact Muon Solenoid (CMS). He also had the opportunity to spend a summer conducting research at CERN (European Organization for Nuclear Research), which is home to the Large Hadron Collider (LHC), the most powerful particle accelerator in the world.  Under the guidance of Peter Wittich at Cornell, McDermott will continue working on CMS and will perform an analysis that will search for the R-Parity Violating (RPV) Supersymmetry (SUSY). SUSY is a theory for extending what is known as the Standard Model, in which each fundamental particle each has a super particle partner. Better understanding the RPV SUSY models will help solve a great deal of problems in particle physics. 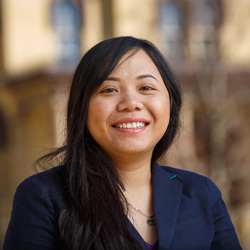 Triet Nguyen is a first year graduate student in the Department of Chemistry and Biochemistry studying theoretical chemistry. Under the guidance of John Parkhill, assistant professor of chemistry and biochemistry, Nguyen is working to advance methodologies in time-dependent quantum dynamics to accurately describe chemical mechanisms, and explore the vast chemical space for optimal functional structures. Specifically, she is working on developing a predictive, atomistic method for simulating non-radiative relaxation for small molecules in condensed phases based on master equation formalism.  Nguyen graduated from the University of Texas at Dallas in 2012 with a Bachelor of Science in Biochemistry. 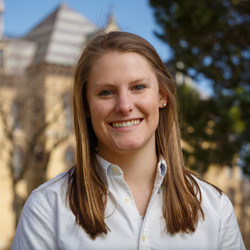 Carolyn Shirey is a first year graduate student in the Department of Chemistry and Biochemistry studying lipid metabolism with Robert Stahelin, adjunct associate professor of chemistry and biochemistry. Her research involves studying ceramide 1-phosphate (C1P), a sphingolipid involved in cell signaling and trafficking, the inflammatory response, and tumor metastasis.  Her research aims to produce a comprehensive assessment of C1P by investigating the specific binding recognition mechanism, and ultimately designing and implementing a biological sensor of C1P for study in vivo.  This will provide scientists with a novel tool for potential future discoveries of the location and trafficking pathways of C1P in cells.  It will also provide cutting edge information for scientists globally, as lipid metabolism abnormalities contribute to a number of diseases. Shirey graduated with honors from Virginia Tech in 2013 with a Bachelor of Science in Biochemistry. 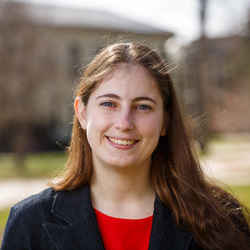 Second year graduate student Cheyenne Tait works in the laboratory of Jeffrey Feder, professor of biological sciences. Rhagoletis pomonella, the apple maggot fly, has diverged rapidly (within the last 200 years) into separate host races based on host plant use.  This divergence represents an early stage on the road to speciation.  Tait’s research focuses on the basis of olfactory preference and she will use neurophysiological tools to probe the nervous system before turning to RADseq based genetic analyses. Rhagoletis is also an economically important pest species and understanding how it targets fruits could be exploited for control efforts. 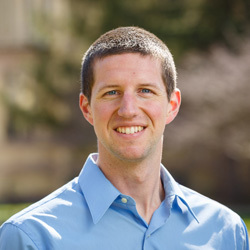 Jacob Zwart is a second year graduate student in the Department of Biological Sciences. His research is focused on improving lake carbon processing estimates in the context of regional and global carbon cycles. Currently, global lake carbon processing estimates are based exclusively on medium to large lakes with stream inflow; however, a majority of lakes globally are very small, and many of these lakes are characterized as being seepage lakes meaning they do not have any stream inflows. Seepage lakes process more of their carbon inputs internally rather than exporting downstream dramatically carbon misrepresent lake contributions to the global carbon cycle.  He is mentored by Stuart Jones, assistant professor of biological sciences.