Research completed at the University of Notre Dame that tracked the maturation of the frog oocyte to an egg, followed by fertilization and progression to the two-cell embryo, provides a valuable foundation for developmental biologists who study the earliest stages of animal development. 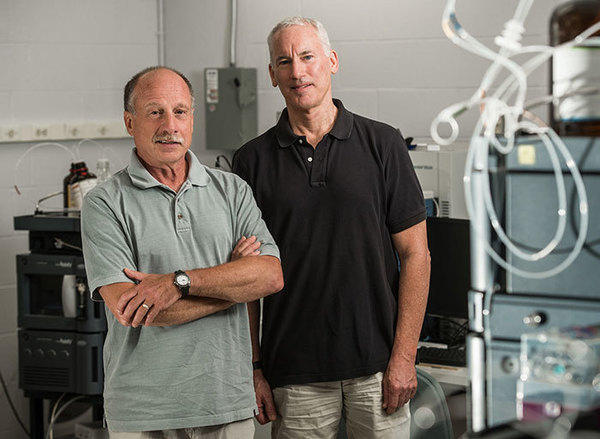 The study, “Phosphorylation Dynamics Dominate the Regulated Proteome during Early Xenopus Development,” was published in Nature Scientific Reports last month. The study was a joint effort between the labs of Paul Huber, professor of chemistry and biochemistry, and Norman Dovichi, the Grace Rupley Professor of Chemistry and Biochemistry, as well as the program lead for the Precision Medicine program.

Using the model organism, Xenopus laevis, researchers measured changes in the levels of proteins as well their phosphorylation, that is, amino acids to which a phosphate group is attached. Phosphorylation changes the cellular identity of proteins, and can have many effects. Not only can it change the structure or activity of a protein, it can also influence a protein’s interaction with other proteins.

“We were able to improve our sample preparation that allowed us to identify about three times more phosphorylation sites than any previous study that had been published,” said lead author, Elizabeth Peuchen, who worked in Dovichi’s lab and on Dec. 8 completed her doctoral degree in Analytical Chemistry. “Our depth of analysis is a lot greater than previous studies, allowing us to dig deeper into the biology and the biochemistry regulating fertilization.”

Also, because the researchers measured both phosphorylation and the protein levels together, they were more clearly able to identify how changes in phosphorylation regulate key events in egg formation and fertilization.

In addition to the increased understanding of the role of phosphorylation in fertilization, the team also discovered that protein levels are modified less than previously expected, said Huber, who is also affiliated with Notre Dame's Center for Stem Cells and Regenerative Medicine. The study also provided evidence that micro-RNAs, which are regulatory molecules, may play a more important role during the earliest stages of Xenopus development than previously expected. The role of micro-RNAs had been somewhat controversial.

“Our research provides a really strong database for future studies for molecular biologists to consider,” Peuchen said. “This study shows the basic trends that allow researchers to go in and look specifically at their protein or site of interest, and that’s the first step to getting any developmental biology project started.”