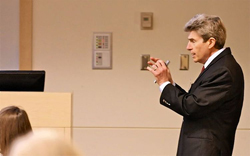 Citrics Biomedical, led by Notre Dame graduate A.J. Noronh and Matthew Vaughn, won for its business plan presentation on its biocompatible, bioresorbable nanocomposite product called CitrOSponge, which is designed to facilitate bone healing and aid in hard-tissue regeneration. The venture is housed in Innovation Park, a research park wholly owned by Notre Dame that seeks to help build commercialization bridges between the University of Notre Dame and businesses at all stages of development, from startups through established regional firms and Fortune 500 companies.

MagnAgents and MT2, two companies also affiliated with Purdue, each received $1,000 as the fourth- and fifth-place finishers in the event, which was held at Discovery Park’s Burton D. Morgan Center for Entrepreneurship.

“We are starting something here by bringing together exciting nanotechnology companies that point to what Indiana can do when our universities and business leaders come together with a goal to make a difference,” said Robert Dunn, managing director of Notre Dame’s Center for Nano Science and Technology and Indiana’s Midwest Institute of Nanoelectronics Discovery, known as MIND. “The goal is to continue the momentum that Notre Dame and Purdue have started with this inaugural Nanotechnology New Ventures event.”

“The depth, breadth and quality of these business ventures shows why the state of Indiana can be confident about our future in establishing a nanotechnology economy of companies that foster growth and create jobs,” said event co-organizer Richard Cosier, the Avrum and Joyce Gray Director of the Burton D. Morgan Center for Entrepreneurship. “Everyone of these finalists is a winner.”

The five finalists were selected by judges from an initial list of 23 entries. To compete, contestants must be affiliated with the state of Indiana through a public or private university/ college or another state-supported agency/organization.

Notre Dame professors Ruggiero and Tanner launched LightSprite for advancing a platform that can characterize nanoparticles and pathogens. The process has environmental applications in invasive species detection as well as monitoring geometrical characteristics of proteins and assisting in medical diagnostics.

Tymora Analytical, which has an office at the Purdue Research Park in West Lafayette, is advancing two nanopolymer-based lead reagents, PolyMAC and pIMAGO, which are designed to make it easier for drug developers to test the effectiveness of widely used cancer inhibitors.

MT2, launched by Purdue assistant professor of chemical engineering Yue Wu, is developing a technology for large-scale production of molecular wires of chalcogenides and complex metal oxides. These would be used to manufacture advanced thermoelectric generators and solid-state cooling systems for automobile and industrial applications.

In addition to Purdue and Notre Dame’s Mendoza College of Business and Gigot Center for Entrepreneurial Studies, competition organizers are the Indiana Economic Development Corporation and MIND, an initiative that was launched in March 2008.

The alliance involves Purdue, Notre Dame, the Nanoelectronics Research Initiative of the Semiconductor Research Corp., the state of Indiana, the City of South Bend and the National Institute of Standards and Technology. Other university partners are the University of Illinois, Pennsylvania State University and the University of Michigan.