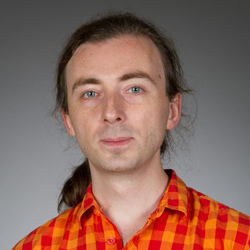 Professor Misha Gekhtman described Poisson geometry as an area of mathematics that provides a geometric framework for investigation of intrinsic properties of classical and quantum physical systems. It both draws on techniques from and influences a variety of mathematical subjects from analysis to algebra to topology. Mnev’s work is at the interface of Poisson geometry, topology and mathematical physics. Professor Mark Behrens added that Mnev’s work, “is based on the idea that if you know the local values of integrals over different regions of the space in which you are doing physics, you can get global expectation values over the whole space by a patching technique. Interestingly, he finds that you can read off certain topological invariants of the space you are doing physics on from these global expectation values.”

Mnev, an assistant professor in the department of mathematics, received his Ph.D. in 2008 from the St. Petersburg Branch of the Steklov Mathematical Institute of the Russian Academy of Sciences under the direction of Ludwig Faddeev, a group that is credited with a number of crucial developments in modern theoretical and mathematical physics. Mnev held a postdoctoral position at the University of Zurich and was most recently an advanced researcher at the Max Planck Institute for Mathematics in Bonn, home of the world’s preeminent group working on applications of topology to physics. Mnev has been favorably compared to several senior researchers at top institutions, and brings much-desired expertise to the department of mathematics.