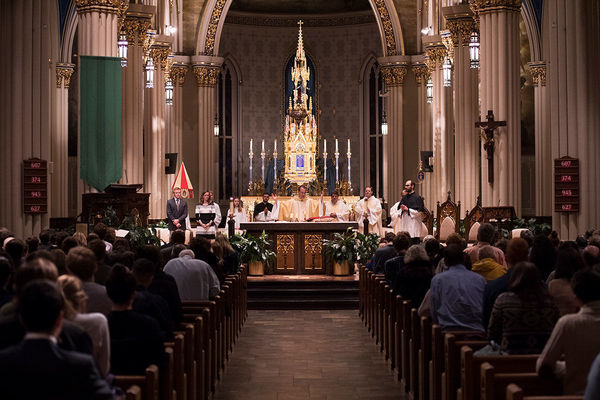 The second annual Gold Mass for scientists and engineers will be celebrated at 5:15 p.m. Nov. 15 (Thursday) in the Basilica of the Sacred Heart at the University of Notre Dame. Rev. Terrence P. Ehrman, C.S.C., assistant director of the Center for Theology, Science and Human Flourishing, will preside and preach.

Named for the color of the hoods worn by individuals graduating with a Ph.D. in science, the Gold Mass is also associated with St. Albert the Great, the patron saint of scientists.

The first Gold Mass for scientists and engineers was held on Nov. 15, 2016, at the Massachusetts Institute of Technology, and Notre Dame followed that tradition in 2017. The Mass was established by the Society of Catholic Scientists, an idea that grew from a seed planted in a 1988 letter penned by Pope (now Saint) John Paul II in which he wrote, “Science can purify religion from error and superstition; religion can purify science from idolatry and false absolutes. Each can draw the other into a wider world, a world in which both can flourish.”

The oldest Mass for professions, the Red Mass for lawyers and lawmakers, began in the 13th century. The White Mass for health care professionals and Blue Mass for law enforcement were introduced in the 1930s.

The lecture, “Disease and the Problem of Evil,” will be presented by Stephen Meredith, a professor in the University of Chicago’s departments of pathology, biochemistry and molecular biology, and neurology. Meredith will explore an ancient question: If God exists and is both perfect and all-powerful, how can we account for the occurrence of deadly diseases and the suffering that results from them?

All events related to the Gold Mass — the Mass, reception and Edison Lecture — are free and open to the public. People of all denominations and faith traditions are welcome to participate.

For more information regarding the Mass and lecture, visit science.nd.edu/events/gold-mass-and-lecture/.