Researchers have developed a novel platform to more accurately detect and identify the presence and severity of peanut allergies, without directly exposing patients to the allergen, according to a new study published in the journal Scientific Reports. 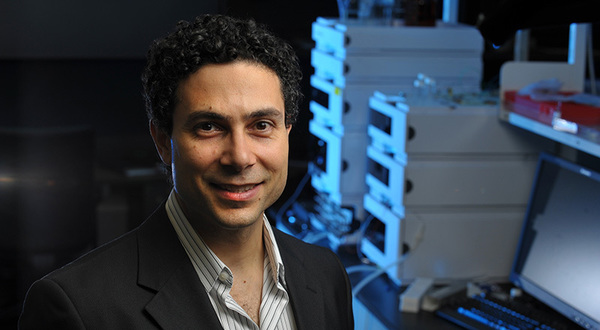 A team of chemical and biomolecular engineers at the University of Notre Dame designed nanoparticles that mimic natural allergens by displaying each allergic component one at a time on their surfaces. The researchers named the nanoparticles “nanoallergens” and used them to dissect the critical components of major peanut allergy proteins and evaluate the potency of the allergic response using the antibodies present in a blood sample from a patient.

“The goal of this study was to show how nanoallergen technology could be used to provide a clearer and more accurate assessment of the severity of an allergic condition,” said Basar Bilgicer, associate professor of chemical and biomolecular engineering and a member of the Advanced Diagnostics and Therapeutics initiative at Notre Dame. “We are currently working with allergy specialist clinicians for further testing and verification of the diagnostic tool using a larger patient population. Ultimately, our vision is to take this technology and make it available to all people who suffer from food allergies.”

Food allergies are a growing problem in developing countries and are of particular concern to parents. According to the study, 8 percent of children under the age of 4 have a food allergy. Bilgicer said a need exists for more accurate testing, improved diagnostics and better treatment options.

Current food allergy testing methods carry risks or fail to provide detailed information on the severity of the allergic response. For instance, a test known as the oral food challenge requires exposing a patient to increasing amounts of a suspected allergen. Patients must remain under close observation in clinics with highly trained specialists. The test is stopped only when the patient exhibits an extreme allergic response, such as anaphylactic shock. Doctors then treat the reaction with epinephrine injections, antihistamines and steroids.

The skin prick test, another common diagnostic tool, can indicate whether a patient is allergic to a particular food. However, it provides no detail on the severity of those allergies.

During skin prick testing, doctors place a drop of liquid containing the allergen on the patient’s skin, typically on their back, and then scratch the skin to expose the patient. Skin irritations, such as redness, itching and white bumps, are indications that the patient has an allergy.

“Most of the time, parents of children with food allergies are not inclined to have their child go through such excruciating experiences of a food challenge,” Bilgicer said. “Rather than investigate the severity of the allergy, they respond to it with most extreme caution and complete avoidance of the allergen. Meanwhile, there are cases where the skin prick test might have yielded a positive result for a child, and yet the child can consume a handful of the allergen and demonstrate no signs of any allergic response.”

While the study focused on peanut allergens, Bilgicer said he and his team are working on testing the platform on additional allergens and allergic conditions.

Originally published by Jessica Sieff at news.nd.edu on June 26, 2017.