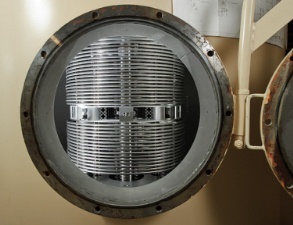 The first new accelerator for low-energy nuclear physics in the United States since the 1980s was recently installed at Notre Dame. The $3.5 million project includes a 10–ton tank installed vertically in the center of Nieuwland Science Hall and will provide beams to the newly–designed St. George Recoil Separator at Notre Dame.

“It’s mainly for nuclear astrophysics, for simulating nuclear reactions that take place in stars and other stellar environments,” said Michael Wiescher, the Freimann Chair of Physics and director of the Physics Frontier Center JINA (Joint Institute for Nuclear Astrophysics). Wiescher came to Notre Dame in 1985 to start the University’s nuclear astrophysics program, now one of the leading global centers.

Notre Dame’s nuclear physics program includes about 25 graduate students as well as research faculty and postdoctoral fellows, making it one of the largest nuclear physics groups in the world. Researchers from other departments, from anthropology to archaeology and architecture, also use the facility in their work.

In addition to the new accelerator, which will produce heavy ion beams, two other accelerators will continue to operate in Nieuwland Science Hall, providing mostly proton and alpha beams to several experimental setups.