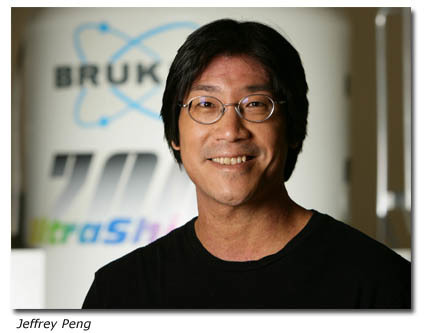 A new study by a team of researchers led by Jeffrey Peng, assistant professor of chemistry and biochemistry at the University of Notre Dame, is using Nuclear Magnetic Resonance (NMR), to move drug design into groundbreaking consideration of the dynamic flexibility of drugs and their targets.

The research which was published by the Journal of the American Chemical Society contributes to the growing attention given towards the shape-shifting movement of molecules, a feature that potentially could help drug designers overcome issues of resistance, transportation of drugs to targets, and oral bioavailability. “The new focus is that it’s not enough just to look at the protein motion,” says Peng. “Of course, we've studied protein motions for some time, as many disease-related proteins are flexible. But we've also realized that in order to impact drug discovery, we also have to look at the candidate drug molecule that is being desiged, that is, the ‘ligand.’ It can move too.”

Drug design involves iterative changes of a ligand to optimize its drug-like properties, which include, among other issues, the ability to cross biological membranes and bind specifically to a drug-target, usually a protein. The rules for doing this are well-established for rigid ligands, but much less so for flexible ligands, which turn out to be common starting points for many drug-targets. "Understanding that lets us predict how flexibility can affect drug-like properties, and how that flexibility should be manipulated in drug design is still elusive," says Peng.

“We need experimental methods that can tell us, systematically, how architectural changes in the candidate drug molecule can change its flexibility relevant for drug-like properties. These methods would benefit not just one particular kind of disease but basically drug design in general,” including therapies for cancer, AIDS and MRSA. “The paper is a beginning of how to systematically understand how we should make ligand molecules, candidate drug molecules, floppy or not floppy, in order to best interfere with the target protein. For example, we can test the idea that some residual ‘floppiness’ in a drug may help it co-adapt with a protein target site that ‘morphs’ over time, on account of drug-resistant mutations. We can also study how drug ‘floppiness’ can affect its ability to cross biological membranes and reach its protein target.”

Peng, who worked as a biophysicist at a pharmaceutical company for 10 years before he came to Notre Dame, said the study of flexibility-activity relationships (FARs) adds another dimension to the longstanding structure-activity relationships (SARs) that scientists have studied. Addressing the dynamism of both the target molecule and the drug molecule can provide important resources for drug designers.

“If you could know, atom by atom, which parts have to move and which do not have to move to bind to a target protein, that’s information a chemist can use,” he says. “They can change the ligand as chemists do, repeat the activity assay, and see if it has improved.”

The research was funded by the National Institutes of Health and is part of a collaboration between the Peng laboratory and the laboratory of Felicia Etzkorn at Virginia Tech.