It is not uncommon for science faculty to embark on international travel to meet with other scholars in their field in order to discuss and share ideas. This certainly is the case with Ani Aprahamian, Freimann Professor of Experimental Nuclear Physics. However, it is certainly out of the ordinary to meet well-known scientific and state leaders. In the course of a couple of weeks in late October into early November, Aprahamian traveled to Cuba and Armenia. In these two weeks, Aprahamian met both President Serzh Sargsyan of Armenia and Fidel Castro, commonly known as Fidelito, and who is the son of the late and infamous Cuban leader Fidel Castro. 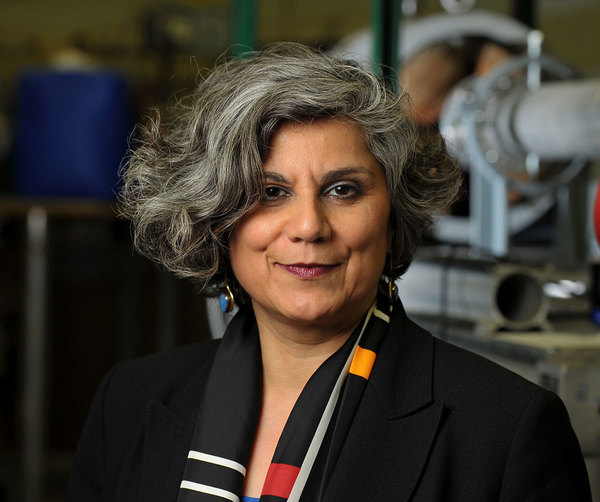 Aprahamian traveled to Havana for the biennial Latin-American Symposium on Nuclear Physics and Applications (LASNPA). Rotating around Latin America every two years, LASNPA hosts the most prominent nuclear physicists of Latin America along with experts from the United States, Europe, and Asia. For Aprahamian, going to Latin America was nothing new. “I have many collaborations with scientists from South America, particularly from Brazil and Mexico. Some of our former graduate students and postdocs are now professors in Columbia, Brazil, Mexico, and other countries. I am often invited to give addresses at these meetings,” Aprahamian said.

Despite the easing but still tense relationship between the U.S. and Cuba, Aprahamian had little hesitation to go to Cuba. She wanted to go and had many friends from South America attending the conference symposium.

During her trip, Aprahamian had the chance to meet with Fidelito, a fellow nuclear physicist and the president of the university where the symposium was held. Fidelito was especially interested in meeting American scientists as his guests. The scientific agenda for Cuba is to export medical technologies and modernize science in Cuba, especially in the field of nanotechnology. “He was very kind and gracious,” Aprahamian said. “He is working on getting his country to be technologically advanced, and I can't blame him. That is the only solution for them in Cuba.”

Noting life in Cuba, Aprahamian observed the high level of education in Cuba and the sophistication of the arts and music while also recognizing Cuba’s shortcomings in its current state of affairs. “Overall, I was impressed with Cuba but also sad that they are so close and yet so far.”

But Cuba was not Aprahamian’s only major trip as she traveled to Yerevan less than two weeks later for the PanArmenian Scientific Conference, a gathering of international scientists to give aspiring Armenian scientists international networking opportunities. Aprahamian, an ethnic Armenian whose grandparents survived the Armenian Genocide, is a member of Armenia’s National Academy of Sciences, which opened its doors to the Armenian expatriates after declaring independence from the Soviet Union in 1991. As part of that body, Aprahamian provides counsel and scientific evaluations.

During her trip, Aprahamian discussed the state of science in Armenia with President Sargsyan twice. Despite Armenia’s dark history from the 20th century, Aprahamian feels hopeful for Armenia’s future. “All of us Armenians living in the diaspora are grandchildren of the genocide survivors. We view the republic of Armenia as our hope for the future of Armenian survival. I do hope that he will do good things for Armenia but the situation is complicated, since Armenia is landlocked and blockaded by Turkey and Azerbeijan,” Aprahamian said. “I was there to encourage him to support science in Armenia. That is what I hope for. It is a point of pride for me and my family to have Armenia succeed.”