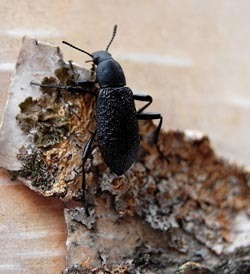 A breakthrough discovery by Kent R. Walters Jr. and John G. Duman of the Department of Biological Sciences, Anthony S. Serianni of the Department of Chemistry and Biochemistry, and researchers from the University of Alaska has revealed a new way that insects protect themselves from freezing. The discovery, is included in a New York Times Science article titled, “When Built-In Antifreeze Beats a Winter Coat.”

Scientists have long known that some animals, including some Antarctic fish, the snow flea, the fire colored beetle, and the spruce budworm caterpillar, protect themselves from freezing by producing an antifreeze that prevents ice crystals from growing. All the known antifreezes were proteins. The group isolated and analyzed an antifreeze, called xylomannan, from a freeze-tolerant beetle and found that it contained little or no protein, even though produced antifreeze comparable to the most active insect antifreeze proteins.