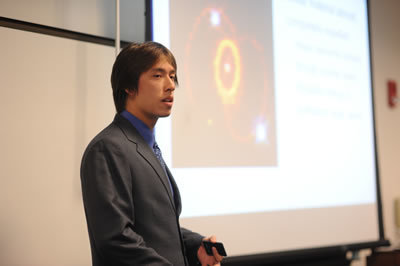 The second College of Science Joint Annual Meeting (COS-JAM) on May 2 brought more than 70 students, almost twice as many as last year, to present their undergraduate research, along with faculty and fellow students who filled lecture halls and classrooms and crowded the poster-lined Jordan Hall of Science Galleria. The event was part of the University of Notre Dame Undergraduate Scholars Conference.

In a classroom for oral presentations in physics, Andrew Hartnett presented research that could lead soon to a far smaller, cheaper proton accelerator by using superconducting magnets. That would make proton therapy for treating cancer far more available in hospitals, because the handful of systems now in place cost nearly $100 million and weigh 200 tons. Hartnett’s research involves using a set of bars to channel the proton beam toward the cancer when it leaves its orbit.

At a chemistry poster in the Galleria, Christopher Mariani explained his research that could help treat Niemann-Pick Disease, a rare disease that prevents the metabolism of lipids and cholesterol within cells. The compound FM1-a-13 has been shown to lower cholesterol in cells with Niemann-Pick. Present work involves producing analogs of FM1-a-13 in search of improved biological activity.

In a classroom for mathematics oral presentations, Marianne Beyer, a double major in finance and mathematics, presented her work on ordinary differential equations that can be solved to determine an investor’s optimal consumption and investment in stocks and bonds per period over a lifetime. She altered an equation discovered in 2004 that occasionally allowed for the return on risky stocks to be lower than the return on safe bonds. The new model, which eliminates that possibility, assumes that the investor lives to infinity and has exactly no money at death. Further research can show more realistic investing conditions using the equation.

In a lecture auditorium for biology, Michael McCann presented his analysis of ways to control Eurasian watermilfoil, an invasive plant in Indiana lakes that the state now spends about $1 million a year to control. McCann presented two 10-year plans for attacking the problem. An aggressive approach would cost $7 million more (equivalent, he said, to 15 cents on each fishing license for 10 years) and control the pest at acceptable levels. A targeted approach based on the current budget would reduce the pest to acceptable levels in 58 percent of the lakes, the larger ones that account for 93 percent of the lake surface area. However, the watermilfoil in remaining ponds could be the source of new invasions.

In the early afternoon, biology research was presented from the molecular and cell fields, while research projects presented after the midafternoon poster session focused on evolution and ecology. In all, COS JAM included 23 research projects in biology, 24 in chemistry and biochemistry, 18 in physics and 7 in mathematics. The number of College of Science undergraduates who participate in research has more than doubled since 2000.