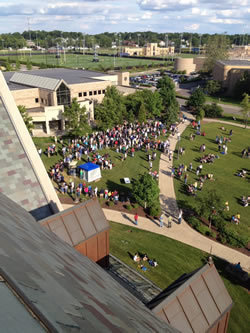 On Tuesday, June 5, members of the Notre Dame and South Bend communities came to the Jordan Hall of Science to witness the Transit of Venus, a rare astronomical event in which the Earth, Venus and the Sun align. Over one thousand visitors gathered to watch Venus transit the sun for the last time this century.

Staff, students and professors handed out solar glasses to the first 500 people to attend the event and eight telescopes with special solar filters were set up on the south lawn of Jordan Hall for visitors to get a closer look at the transit. The two largest lecture halls in Jordan were filled with people watching a live simulcast of the transit from Notre Dame's telescope and a NASA telescope. Notre Dame scientists lectured and answered questions about the transit as it occurred. A concession stand at the Sundial sold hotdogs, drinks and specially made "transit cookies."

“With all the people and excitement It felt like a football Saturday”, said Professor Peter Garnavich of the Department of Physics. Garnavich made sure that the 150 year-old Napoleon Telescope on top of Nieuwland Hall viewed the Venus transit of 2012. The scope had missed an opportunity in 1882 due to the great fire of 1879.

The College of Science sponsored a series of events prior to the actual transit, including Digital Visualization Theater (DVT) presentations, a concert with Axiom Brass featuring Celestial Suite and a transit of Venus exhibit at the Hesburgh Library.

The transit of Venus will not be seen on Earth again until 2117.

Image of the Venus transit taken at the Jordan Hall observatory. At the right, Venus is just starting it's transit while a large Solar prominence is seen at the center. Image Credit: Colin Littlefield