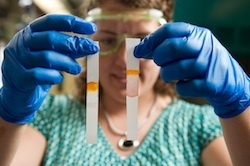 A collaborative research program involving faculty, graduate students, undergraduates and high school teachers and students is working to develop low–tech field tests for chemicals, with numerous applications in developing countries. The effort is led by six Notre Dame faculty members — Marya Lieberman, Holly Goodson, and Graham Lappin of Chemistry and Biochemistry; Patrick Flynn of Computer Science and Engineering; and David Go of Aerospace and Mechanical Engineering — with collaborators Toni Barstis at Saint Mary’s College and George Twaddle at Ivy Tech Community College. The project is affiliated with the Advanced Diagnostics and Therapeutics Initiative and the Eck Center for Global Health.

The researchers are developing different types of Paper Analytical Devices (PADs). The PADs contain different indicators that can detect the presence of specific chemicals. Several chemical tests can be run at one time without any electrical power or instrumentation, and the results are analyzed by a computer program accessed by a cell phone to avoid the subjective judgment of the user. 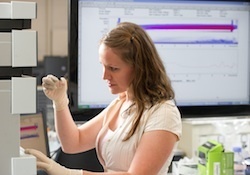 Tests are being developed to detect counterfeit pharmaceuticals, including anti–malarial drugs, tuberculosis treatments, anti–retrovirals, antibiotics, Tamiflu and Panadol. In many parts of the developing world, an estimated 10 to 30 percent of medications purchased by consumers are fake. The consumer has no way to detect counterfeits, and even health workers and pharmacists often lack basic resources such as electricity, let alone access to analytical labs with high tech instrumentation. Availability of a low–tech test for suspicious drugs could improve medical outcomes in these countries.

Similar low–tech PAD tests are being developed to maintain quality control at salt factories in Haiti, where a chemical is added to the salt in order to kill the nematode responsible for lymphatic filariasis, the parasitic disease also known as elephantiasis. Other applications include tests for environmental contamination. In Bangladesh, for example, vast numbers of tube wells need to be tested for arsenic. One group in the PAD project is genetically engineering a strain of yeast that will respond to arsenic by producing either a color or scent—perhaps banana. 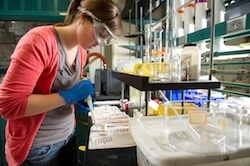 The project started last summer with PAD fabrication, and tests continue on the wide range of potential materials including cellulose, textile and polymer. Teams of researchers are working on different applications of the technology. Lieberman expects to conduct a large scale field test of the counterfeit drug PADs and the phone app at Notre Dame next spring.