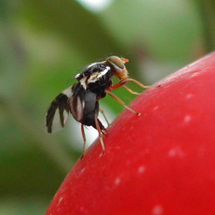 A new paper by a team of researchers led by University of Notre Dame biologist Jeffrey Feder could herald an important shift in thinking about the genomics of speciation.

Titled “Widespread genomic divergence during sympatric speciation,” the paper appears in today’s edition of the Proceedings of the National Academy of Sciences.

The prevailing assumption among scientists about how the genomes of newly forming species should differ during the earliest stages of divergence with gene flow speciation is that it will be characterized by a few regions of strong differentiation, amidst a remainder of the genome that remains unaffected by natural selection and thus relatively undifferentiated. This analogy of “genomic islands of speciation” has come to dominate the evolutionary genetics community.

“The island concept has crystallized around an attractive hypothesis termed ‘divergence hitchhiking,’ in which selection on one or a few genomic regions drives speciation,” Feder said.

In the new paper, Feder and his colleagues report experimental and genomic evidence that, contrary to the prevailing assumption, speciation in the classic apple maggot fly system Rhagoletis pomonella involves genome-wide differentiation driven by natural selection.

“Our result in Rhagoletis conflicts with the current thinking about how the genomes of newly forming species could differ during the earliest stages of divergence-with-gene-flow speciation,” Feder said. “Rather than finding just isolated ‘genomic islands’ of genetic divergence, we instead discovered ‘continents’ of divergence encompassing large swaths of the genome.”

He points out that past work on the genomics of speciation lacked experimental data and thus may have been unable to detect genomic regions under weaker natural selection, establishing a view of speciation involving genetic divergence in just a few, isolated genomic islands.

Rhagoeitis pomonella fruit flies originally attacked the fruit of hawthorn trees. But about 150 years ago, a portion of the hawthorn fly population shifted and began to feed on apples. In ecologically adapting to apples as a new host plant, apple flies are becoming genetically distinct and reproductively isolated from hawthorn flies. Apple and hawthorn flies are therefore considered to represent “host races” in the early stages of actively diverging into species.

As such, the apple and hawthorn races of Rhagoeitis pomonella provided Feder and his fellow researchers a unique opportunity to conduct a direct experimental test of the island versus continents hypotheses.

“This type of comprehensive data, particularly the experimental results, are missing from the bevy of genome scan studies performed in the last few years lending support to the island hypothesis,” Feder said. “Without experimental data on responses to selection, these genome scan studies alone can be biased toward identifying isolated outer loci, supporting the island hypothesis.

“We foresee that as mass genotyping techniques continue to advance, it will be these types of inquires and questions that come to dominate the emerging field of population genomics and speciation. We hope our study offers a glimpse of what the future may look like.”

The research was funded by the National Science Foundation and the U.S. Department of Agriculture.