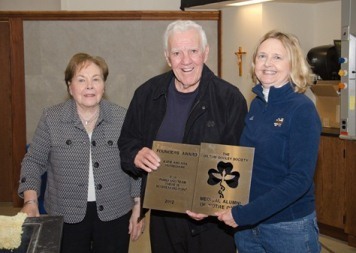 The Dooley Society awarded its 2012 Founder’s Award to Katie and Ara Parseghian, recognizing the contributions of the legendary former football coach and his wife to awareness and research funding for Niemann-Pick Type C disease. The family started the Ara Parseghian Medical Research Foundation after three of the Parseghians’ grandchildren were diagnosed with NPC in 1994.

The foundation has raised some $33 million and funded some 75 researchers, including 14 currently conducting projects. Its Notre Dame ties were deepened in 2010 with the establishment of the Michael, Marcia and Christa Foundation for Excellence that sponsors research and an annual conference with scientists and families.

Mark Hubbard, whose son Dr. Matthew Hubbard started the Dooley Society in 2004, presented the award to the couple at the society’s Oct. 13 Football Saturday event at the Jordan Hall of Science where Notre Dame researchers Paul Helquist and Olaf Wiest gave a talk, “In Pursuit of a Treatment for Niemann-Pick Type C Disease.”

“It goes to all the Parseghians,” said Ara Parseghian, including his son Mike and daughter-in-law Cindy, who initiated the foundation after their children were diagnosed. “‘No breaking point’ – that was one of my themes when I was coaching,” he said, referring to an inscription on the award. “We have no circumstance we can’t overcome.”