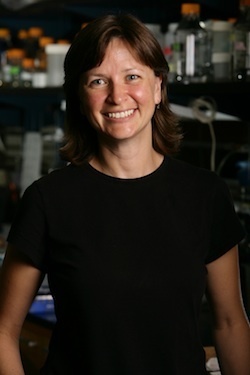 Patricia Clark, the Rev. John Cardinal O’Hara, C.S.C. Associate Professor of Chemistry and Biochemistry at the University of Notre Dame and Bonnie Berger, professor of applied mathematics at the Massachusetts Institute of Technology, have published a paper this week describing the development of a computer algorithm that accurately predicts which parts of protein sequences help prevent the proteins from aggregating. Protein aggregation leads to numerous human diseases such as Alzheimer’s disease and other neurodegenerative diseases.

Protein aggregation occurs when the long linear sequence of a protein fails to fold correctly, and instead misfolds and forms interactions with other copies of itself. Misfolding and aggregation prevents proteins from performing their essential functions in the cell, which can lead to numerous devastating diseases ranging from juvenile cataracts to cystic fibrosis and cancer. The misfolded, aggregated proteins can also form toxic structures called amyloid fibers, which are linked to Alzheimer’s, Huntington’s, Lou Gehrig’s and other neurodegenerative diseases. Learning more about the mechanisms that lead to aggregation and the structural features that some proteins possess that help avoid aggregation could lead to novel strategies for treating aggregation diseases.

Clark and Berger’s current article demonstrates that aggregation-resistant proteins tend to possess “capping” structures at either end of their correctly folded structure. When one of these caps is removed, the remaining protein quickly aggregates. Significantly, proteins known to be highly prone to aggregation do not contain these capping structures. These results may provide a way to predict in advance which proteins, and which genetic mutations, will be likely to lead to aggregation.