Notre Dame astronomer, Timothy Beers, Ph.D., and nuclear astrophysicist Rebecca Surman, Ph.D., were elected Fellows of the American Physical Society (APS) by the APS Council of Representatives at its September 2016 meeting. The APS is a non-profit membership organization working to advance and diffuse the knowledge of physics through outstanding research journals, scientific meetings, and education, outreach, and advocacy.

Beers was nominated by the Division of Nuclear Physics “for extensive surveillance of the metal-poor stars in the Milky Way that constrain the origin of the elements in the universe and the nature of neutron-capture nucleosynthesis processes in early generations of stars.” Beers received a Ph.D. in astronomy from Harvard University in 1983, an M.S. in astronomy from Harvard in 1980, and two B.S. degrees, in physics and metallurgical engineering, from Purdue University in 1979. He was a professor of physics and astronomy at Michigan State University for 26 years, from 1986 to 2012, retiring from that position as University Distinguished Professor, Emeritus, in order to take a position as Director of Kitt Peak National Observatory in Tucson, AZ, from 2012 to 2014, prior to joining the Notre Dame faculty in 2014. Beers is currently a professor in the department of physics and the Notre Dame Chair in Astrophysics. 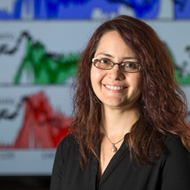 Surman was also nominated by the Division of Nuclear Physics for her “contributions in elucidating r-process nucleosynthesis, in particular for connecting microphysics such as mass models and reaction rates to astrophysical environments, and for guiding the experimental efforts worldwide on deciding the most impactful nuclei to study at exotic nuclear beam facilities.” Surman received a Ph.D. in physics from the University of North Carolina at Chapel Hill in 1998, an M.S. in physics from Michigan State University in 1995, and a B.A. in physics from the State University of New York College at Geneseo in 1993. She taught physics and astronomy at Union College prior to joining Notre Dame as associate professor of theoretical nuclear physics and astrophysics in 2014.

APS has more than 51,000 members, including physicists in academia, national laboratories, and industry in the United States and throughout the world. The number of APS Fellows elected each year is limited to no more than one half of one percent of the membership. Fellowship is a distinct honor signifying recognition by one's professional peers. The criterion for election is exceptional contributions to the physics enterprise; e.g., outstanding physics research, important applications of physics, leadership in or service to physics, or significant contributions to physics education.