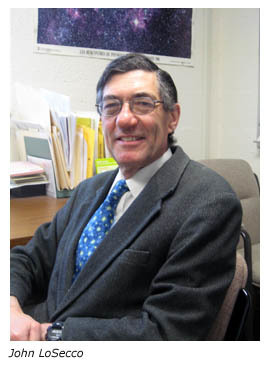 A group of researchers from the Notre Dame physics department, led by John LoSecco, professor of physics, has just joined the long baseline neutrino experiment, LBNE. LBNE is a joint research project between the National Science Foundation’s DUSEL underground lab and the Department of Energy’s Fermilab accelerator. The goal of the project is to study neutrino properties by transporting a beam of medium energy neutrinos from Fermilab to a detector deep underground in the former Homestake gold mine in Lead, South Dakota.

Neutrinos are a very light, uncharged elementary particle that is a common byproduct of nuclear energy production in the sun or reactors on Earth. The experiment will be optimized to be more sensitive to small effects, such as CP violation, that have been difficult to study with existing projects. Current plans call for a 700 kilowatt neutrino beam and as large as a 300 kiloton detector. The detectors would be located 4,800 feet underground to shield them from interference from natural environmental radioactivity. The Notre Dame team brings to
the project experience in working with very large underground detectors and in constructing specially-designed neutrino beams. Professor LoSecco has used similar techniques in prior projects to get a glimpse of the neutrino mass and to observe the neutrino's contribution to the stellar processes known as a supernova.

The LBNE project may also open a new window on the question of Dark Matter. Dark Matter dominates our universe by providing the majority of the gravitational force on the galactic and intergalactic scale. Dark Matter is so named because it can not be detected visually by
astronomers. The large LBNE detectors may provide access to Dark Matter decay directly in the laboratory or indirectly via an energetic neutrino signal from the sun. 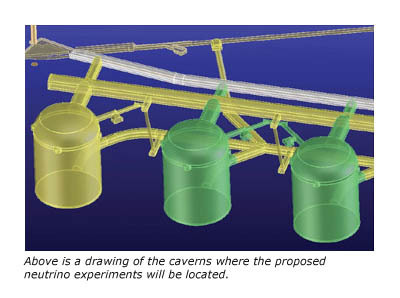