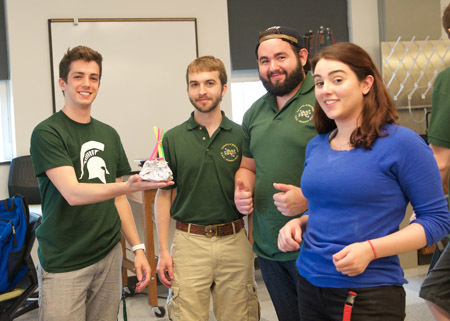 A team shows off their raft for "Raft in Dire Straits."

In the activity titled “Faraday Pickup,” students used copper wire, nails, tape, and batteries to build electromagnets. Each circuit was tested to see which team maximized the strength of the electromagnets by picking up the highest number paper clips from the table.

For “Raft in Dire Straits,” the students designed and built rafts made of foil. The goal of this activity was to make each boat strong enough to hold a heavy load without sinking.

In the third event, “Bungee Madness,” students used sandbags and rubber bands to build miniature bungees. They considered the sandbag weight, elasticity of the bungee cord, and distance from the balcony to the ground floor. They then released the sandbags, bringing them as close as possible to the floor without touching it.

Umesh Garg, professor of physics and director of the physics REU program, oversees the Physics Olympics each year. Summing up the event, Prof. Garg said, “The students learn to work together in teams even though they come from different schools and don’t already know each other. They are challenged to apply some simple physics to real problems. And, of course, we hope that they have fun.”

Highlights from this year’s Physics Olympics can be seen in the video below.