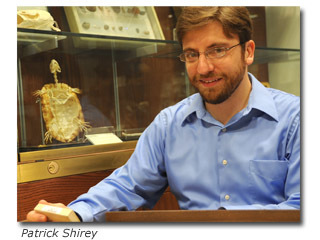 Patrick Shirey, a graduate student in the Department of Biological Sciences and a GLOBES Fellow, was one of three winners of the 2010 Graduate Student Policy Award from the Ecological Society of America.

The Ecological Society of America produced apodcast featuring Shirey in their series titled “Ecologist Goes to Washington.” In the podcast, Shirey speaks about the politics of invasive species control, and how his background in law has informed his research in endangered species.

Shirey’s research focuses on stream and river ecology, as well as natural resources policy.  Shirey, who also holds a law degree, points out that federally-funded science helps leverage support from private industry: “Research in the Department of Biological Sciences at the University of Notre Dame provides an excellent example of the importance of federal investment in fundamental ecological research.  Federal funds from the National Science Foundation (NSF) and other federal agencies have encouraged private support for research in our department from The Nature Conservancy, the Bill & Melinda Gates Foundation, the Frank Eck Family, and the Ford Family.”  Shirey holds a Fellowship from NSF’s Global Linkages of Biology, the Environment, and Society program.  His policy experience includes internships with Pennsylvania’s Bureau of Forestry and Bureau of Parks and Shirey has also participated in an array of policy and communications training workshops.

Listen to the podcast.