Physics-in-medicine major Luke Maillie returned to Tanzania this summer with a solution to the power blackout problem that he encountered last summer. In his sophomore physics seminar taught by Prof. Abigail Mechtenberg last fall, Maillie learned about novel, locally maintainable power generation devices, such as gravity lights. This summer, he got to work connecting with a local energy team. 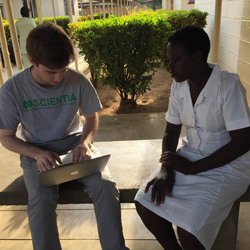 In the summer of 2015, the unimaginable challenges that arise when power is suddenly lost mid-surgery in a rural Tanzanian hospital became a stark and all too familiar reality for Luke Maillie, a Notre Dame physics-in-medicine major and international development studies minor. The desperate need, shared by an entire community, to co-design an affordable backup source of electricity during these power blackouts stuck with Maillie long after he left Tanzania to return to Notre Dame.

Maillie was working at a rural hospital in Tanzania through a Kellogg Institute for International Studies Experiencing the World (ETW) Fellowship  in 2015, the summer after his first year at Notre Dame, when he met the head of the non-profit organization REACH Shirati, Fred Chacha. REACH, a Berkeley-based organization founded by Christine Nyanda Chacha, that provides support, funds, R&D or aid for this Tanzanian community to empower systems of education, health care, and community enrichment in northern Tanzania, was in the process of building a school that would teach English to Tanzanian children, Chacha explained, but the high cost of solar panel energy and the lack of electricity for much of the community remained a looming concern. 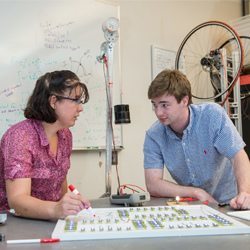 Back on campus, when Abigail Mechtenberg, an assistant teaching professor in physics, mentioned gravity lights during a lecture to his sophomore physics seminar, Maillie had a bright idea: use the novel, locally maintainable gravity lights achieved by using the potential energy in rock weights attached to spinning magnets and coils to illuminate the school and community. Mechtenberg works with people in Uganda and other African nations to implement her E3 international development focus (E3: education, engineering, and entrepreneurship), which starts with the knowledge of gravity lights as a backup plan for hospitals with unreliable power, which grows into minigrid knowledge including wind turbines, hydroelectric generators, concentrating solar power, biogas, and other systems.

When he returned to Tanzania on another ETW fellowship this summer, Maillie introduced the idea of gravity lights to Chacha. “I explained to him what Prof. Mechtenberg does, and what we could potentially do with the gravity light,” he said. “We’re going to build this on the ground in Tanzania. Electricity is just moving magnets and coils. We can work with an energy team,” which is comprised of a local electrician, cable rewinder, metal fabricator, and automechanic. “We did not officially start working on it, but we got our energy team together. We know where they are. We’re ready to move forward next summer.”

Maillie, a Kellogg International Scholar, plans to return to Tanzania next summer and hopes to include other Notre Dame students as well as engineering students from a college in Tanzania to partner in the project. In addition to the school, which is at the end of the town’s power line, he hopes to provide a solution for people who have only torches, candles, and kerosene for light. “It’s all about the local context,” he says. “We want to empower the community.”