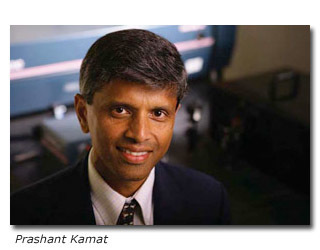 Prashant Kamat, The Rev. John A. Zahm Professor of Science, has been named a 2013 Langmuir Lecturer. Kamat will deliver a plenary lecture in a special session of the Colloid and Surface Chemistry Division program at the 246th ACS National Meeting in Indianapolis in September.

The lecture was named for Irving Langmuir, an American chemist and physicist who earned the 1932 Nobel Prize in Chemistry for his work in surface chemistry, becoming the first industrial chemist to become a Nobel laureate. The American Chemical Society’s journal for surface science research is named Langmuir in his honor.