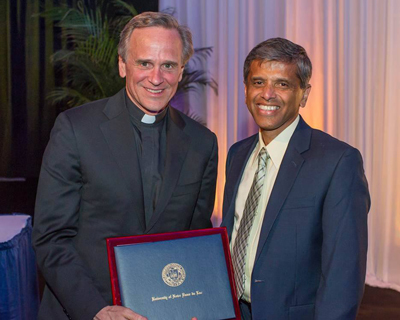 Prashant V. Kamat, The Rev. John A, Zahm, C.S.C., Professor of Science in the Department of Chemistry and Biochemistry, received the Research Achievement Award at the annual President’s Dinner on May 20. Established in 2001, the award honors a distinguished faculty member who has made significant contributions to scholarship in his or her discipline and to the research and graduate education goals of the University.

A principal figure in his field, Kamat focuses on building bridges between physical chemistry and material science by developing materials for cleaner and more efficient light-energy conversion. His projects focus on nanotechnology and materials chemistry, solar energy conversion, chemical processes in heterogeneous media, and solar fuels.

Kamat has published more than 400 peer-reviewed publications, edited three books and is a contributor to 14 books and monographs. Citations of his work number in the tens of thousands, and in 2011, Times Higher Education ranked him among the top 100 chemists of the previous decade based on citations per paper. In addition, the h-index measure of his research impact recently surpassed 100, a distinction achieved by only the world’s most elite scientists.

Kamat earned his masters and doctoral degrees from Bombay University in India in 1974 and 1979 respectively. After completing postdoctoral research at Boston University and the University of Texas, he joined the Notre Dame faculty in 1983.