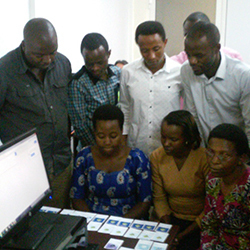 The Fourth Biennial of the African School of Fundamental Physics and Applications (ASP) was held in Kigali, Rwanda, from August 1 to 19, 2016. As part of the program, the International Particle Physics Outreach Group, in which QuarkNet participates, invited their partners to present workshops for high school physics teachers. QuarkNet was one of the main groups that took up the call and organized the effort.

Notre Dame Physicist Tom McCauley and QuarkNet National Staff Teacher Ken Cecire traveled to Africa, specifically Kigali, Rwanda; and Addis Ababa, Ethiopia; to hold day-and-a-half workshops for high school physics teachers. In Kigali, approximately 20 high school physics teachers had the opportunity to work with Cecire, McCauley, plus other international physicists, to learn how to analyze particle physics data. The high school teachers also developed plans for taking their students’ physics knowledge to the next level, using activities and ideas gleaned from the workshop. In addition, McCauley, Cecire, and their collaborators held particle physics workshops for students in high schools in Rwanda and Ethiopia and installed a cosmic ray detector in Ethiopia.

Notably, compared to their counterparts in the United States, fewer students in Africa have heard of CERN, the European Organization for Nuclear Research in Geneva, Switzerland, where the Compact Muon Solenoid (CMS) experiment at the Large Hadron Collider records and analyses data from high-energy particle collisions to study fundamental physics. Notre Dame is part of the CMS collaboration and QuarkNet uses data from CMS as part of its activities, including the ones in Africa.

“We know that there is a great deal of scientific potential in Africa. The teachers and students have a talent for science and care about science, particularly physics,” said Cecire, a former high school physics teacher who works full-time on the QuarkNet national program and its international collaborations. “We can engender tremendous interest in physics in Africa working with high school teachers and students there.”

“They are our colleagues in Africa and we want to foster their affinity for physics,” Tom McCauley, who is based at CERN and is also part of the CMS collaboration, said. “We can positively foster what is referred to as capacity development—building the physics capacity of Africa. There aren’t a lot of physics resources in Africa, but there is a great deal of talent and interest there.” He added, “Their willingness to learn was infectious and were buzzing from the energy and enthusiasm that they had.” Cecire echoed those sentiments, “We met some incredibly talented students and teachers in Rwanda and Ethiopia. They inspired us and it was a privilege to work with them.”

QuarkNet, a collaboration between physicists, high school teachers, and students, working together on particle physics research projects and education exploring the nature of matter, energy, space and time, was co-founded in 1999 by Notre Dame Physicist Randy Ruchti and his collaborators at Fermilab, Berkeley Lab, and Hampton University, and has since grown to an international program. QuarkNet receives funding support from the National Science Foundation (NSF) and the Department of Energy (DOE) and is managed nationally from the University of Notre Dame, where Notre Dame Physicists Mitch Wayne and Dan Karmgard are the lead principal investigator and co-principal investgator, respectively. The program spokesperson, Marge Bardeen, is based at Fermi National Accelerator Laboratory.