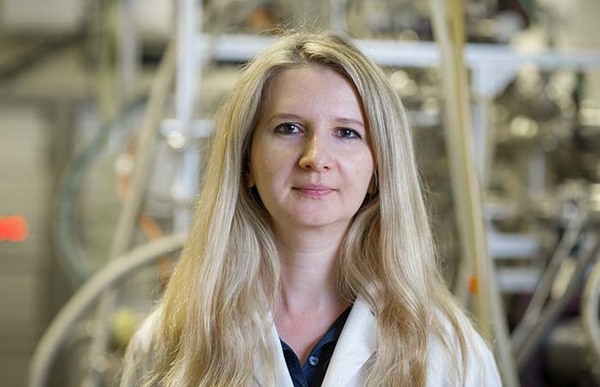 Researchers at the Notre Dame Radiation Laboratory have devised a process to detect neutral radicals, which if more thoroughly understood can be used to improve radiotherapy to kill cancer cells or advance the manufacture of semiconductor chips, among other applications.

A radical is an atom that does not have its electrons paired, making it very reactive. Sylwia Ptasinska, associate professor of physics, and her colleagues devised experiments using their newly developed stepwise electron spectroscopy process to unveil the complete picture of how molecules split, or dissociate. Results of their research, “Characterization of Neutral Radicals from a Dissociative Electron Attachment Process,” were published August 1, 2017 in Physical Review Letters.

The molecule-splitting process, called dissociative electron attachment (DEA), has been extensively studied, especially with carbon tetrachloride, the molecule Ptasinska and her colleagues used for their experiments. Though scientists have been able to visualize the negatively charged particle that’s produced, they didn’t know much about the neutral radical also shed after the reaction.

“For 40 years we could detect the negatively charged ion, but we didn’t have a technique to detect the neutral,” Ptasinska said. “So we concentrated on detection of the neutral fragment, using modified mass spectrometry, in which molecules were ionized and probed by pulsed electron beams with a specific energy.” Understanding why the neutral fragment is important is essential for a wide range of research topics, including cancer therapies and improvements to high-resolution nanolithography, and Ptasinska’s group will continue their research with other molecules to further understand the scope of the DEA process.

The research was supported by the U.S. Department of Energy Office of Science.