Peggy Noonan — Pulitzer Prize-winning columnist for the Wall Street Journal, speechwriter for President Ronald Reagan and author of five New York Times best-sellers — will deliver the principal address and receive an honorary degree at the University of Notre Dame’s 174th commencement ceremony May 19. 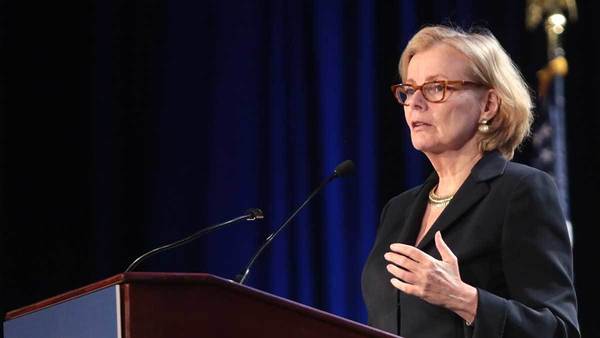 “Peggy Noonan is universally admired for the stirring prose, keen insight and the moral perspective of her commentary on America and the world,” said University President Rev. John I. Jenkins, C.S.C. “I look forward to welcoming her to Notre Dame and hearing her address to our graduates.”

After working at CBS News’ radio division following her graduation from Fairleigh Dickinson University, Noonan joined the Reagan White House in 1984 as a speechwriter. She worked with Reagan on several of his most famous speeches, including the “Boys of Pointe du Hoc,” delivered on the 40th anniversary of D-Day, and his address to the nation following the 1986 Challenger space shuttle explosion, in which she drew upon poet John Magee’s words about aviators who “slipped the surly bonds of earth … and touched the face of God.” The latter was ranked among the top 10 political speeches of the 20th century, and “Pointe du Hoc” is considered one of the century’s top 60 speeches of any kind.

​During Vice President George H.W. Bush’s 1988 run for the presidency, Noonan worked with him on his acceptance speech, in which he spoke of “a kinder, gentler nation” and “a thousand points of light.”

​Noonan also worked in a fictional White House as a consultant on NBC’s television drama “The West Wing.”

Since 2000, Noonan has written a political column titled “Declarations,” which is published weekly in the weekend Wall Street Journal. She was awarded the 2017 Pulitzer Prize for distinguished commentary for “rising to the moment with beautifully rendered columns that connected readers to the shared virtues of Americans during one of the nation’s most divisive political campaigns.”

She is the author of nine books on American politics, history and culture and is one of 10 historians and writers who contributed essays on the American presidency for the book “Character Above All.”

​Early in her career, Noonan was an adjunct professor of journalism at New York University, and she has served as a fellow at Harvard University’s Institute of Politics and an instructor of history at Yale University.

​The 2019 University Commencement Ceremony will be held in Notre Dame Stadium.

Originally published by Dennis Brown at news.nd.edu on December 03, 2018.