Gina Buffaloe and Noah Schroeder came to Notre Dame this summer with the intent of expanding their knowledge of physics through the 10-week program known as Research Experience for Undergraduates, or REU.

Little did they know that Notre Dame’s REU program is one of the nation’s oldest, having gotten its start in 1985 – years before other universities developed similar programs.

Like 13 of the 19 REU students selected for this year’s program, Buffaloe and Schroeder attend universities other than Notre Dame. Buffaloe is a student at St. Mary’s University, San Antonio, Texas while Schroeder attends Valparaiso University, in nearby Valparaiso, Indiana. All were chosen from a field of 150 applicants this year.

“Our program was started, in an informal way, by Bruce Bunker and Randy Ruchti way back in 1985,” explained physicist Umesh Garg.  "In 1987, we became among the first to be funded by the National Science Foundation. Terry Rettig directed the program until 2000, when I took over.”

The NSF contributes funds for 12 applicants which consists of a round trip travel to Notre Dame, a $3,600 stipend plus housing, while the McNair Scholar Program provides similar financial help for 2 minority students. Interdepartmental money rounds out the funding. “Over the 20-plus years the REU program has been running we have had some 300 students from all over the country,” Garg said.

The physics REU program may be the oldest, but it is hardly the sole REU program on campus.

In five of the last six years at Notre Dame, the mathematics department has offered an REU. Four Notre Dame students participated in the first REU in the summer of 2000. Frank Connolly has been the director since its inception.  The Department of Biological Sciences began its program in 1999 and is run by Michelle Whaley, while the chemistry department has had a series of REU programs dating back to the 1990s. A shift in focus occurred in 2000 when chemist Marya Lieberman wrote a grant for a Nanotechnology REU program which ran from 2000-2002. That was followed by a second REU program, an interdisciplinary effort called Nano-Bioengineering which has been running since 2004. “We have 18 students in this year's program, which is the largest program I have ever run.  We have 3 students from Hungary and a German exchange student,” Lieberman said.

To be an REU director one must be adept in the role of matchmaker. Garg, for instance, spends most of March sifting through the pile of applications to link prospective REU students and their interests in physics with one of the 15 Notre Dame faculty members who serve as advisors in their fields of atomics physics, elementary particle physics, astrophysics and astronomy, nuclear physics, biological physics, solid state or low temperature physics.

The REU program is designed to expand the student’s horizons. That certainly was the case for Buffaloe, who is conducting research in nuclear physics under assistant professor Xiao-Dong Tang. “I found that I had very little knowledge of nuclear physics and that there was much more to astrophysics than I had originally perceived,” she said. “This has been an influential program and has really opened my eyes to the various applications and aspects of physics. I must say that I'm much more excited about physics since I've been here.”

Schroeder commented that working one-on-one with his advisor, also Prof. Tang, has given him exposure to physics “beyond the scope of my undergraduate education.”“Performing my own research has been exciting as I'm getting to contribute my own ideas to an experiment my advisor is starting,” he said. “ I've learned a lot this summer about what my career will be like when I get more experienced and farther along in physics.”

Like most REU students, Schroeder works shoulder-to-shoulder with graduate students and has gained insight into life as a graduate student. In fact, over 80% of students who have attended the physics REU program have gone on to graduate school.

Each year in his opening remarks to the new crop of REU students, Garg stresses that this program is both demanding and rewarding.

“I tell them that this is not a 9 to 5 job – or even 40 hour a week job. It is a research experience and so they may find themselves working late at night or sometimes on the weekends,” he said.

“Several have had opportunities to travel with this program.  This summer, I have had one student go to France for an experiment and another student go to Purdue University for a conference. Several have gone to Argonne National Laboratory for their research,” he said. 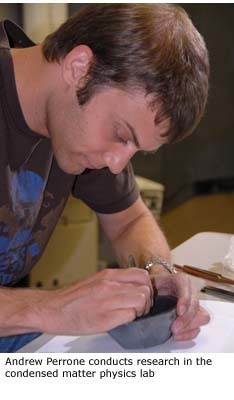 Almost every summer, Garg selects an REU student to fly to Japan to join him in his own research into the compressibility of nuclear matter. This year it is Kristina Sault, a Notre Dame physics major.

The key to the success of every REU program is the willingness of faculty to take on students and help build the next generation of scientists.

“The faculty members of this department have been absolutely marvelous, even though it means committing a lot of time and effort for little direct gain. Most of the students need to be trained so our faculty members know that they must put in many extra hours in the laboratory and classroom. Still, they do so willingly,” Garg said.

Along the way, some REU students come to the conclusion that research is not for them. “This I also consider a positive development since one of the objectives of the REU program is to help students find themselves,” Garg said. “Many will also discover that this is what they really love and that they want to come back to Notre Dame for post graduate study.”