Six years ago in the journal Nature, a group of researchers from Singapore published the first-ever study demonstrating that a semiconductor could be cooled using lasers, ending a decades-long quest in the realm of physics to optically cool solid materials.

New research led by a team of scientists at the University of Notre Dame, however, has called into question the validity of this study, suggesting that the elusive quest to cool a semiconductor using lasers should continue.

The research, published in June in the journal Nature, was spearheaded by Boldizsar Janko, a professor of physics, who is also affiliated with ND Energy and NDnano, and Masaru Kuno, a professor of chemistry and biochemistry, who is affiliated with Advanced Diagnostics and Therapeutics and the Radiation Laboratory in addition to ND Energy and NDnano. 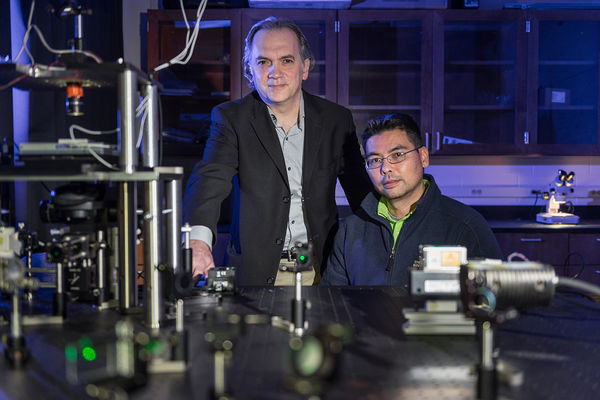 Although lasers are often synonymous with heating and science-fiction action scenes, laser cooling involves using energy in the form of light to decrease the motion of atoms and molecules. Being able to cool a material with lasers has several practical applications in society, in particular for technologies and appliances that heat quickly and must also cool quickly and efficiently.  Laser cooling research could improve the performance of computers and medical devices, for example, or advance military defense mechanisms.

“When you have a laser that operates at high power, the active material gets hot and starts to deform from an optical standpoint, so the quality of the lasing deteriorates,” Kuno said. “With a laser that can use some of its own light to cool itself and prevent that degradation, you have a very stable platform by which you can use the laser to do a whole bunch of things.”

In the past, researchers have demonstrated laser cooling with gas and glassy materials that contain a minute amount of metallic impurities, but it has proven more difficult in solid materials and impossible in semiconductor substances. Semiconductors, which are solids having both electrical and insulating properties, are used in circuits and electronic devices today. In 2013, researchers in Singapore were the first to report laser cooling in any semiconductor.

Interested in performing simulations based on these results, Janko and Kuno requested samples of the specimen — chemically grown cadmium sulfide (CdS) nanobelts — from the Singapore group and conducted a series of experiments and simulations on them. Their investigation probed the emission properties of the material, revealing a series of experimental and theoretical problems and contradictions with the findings of the Singapore group. The major discrepancy was that reported cooling timescales were over ten million times slower than what would be expected based on known physics. These results suggested that semiconductor laser cooling had not yet been achieved.

“We all agree that laser cooling is extremely important and can be done. We’re not ruling out the possibility of laser cooling,” said Janko, who also directs Notre Dame’s Institute for Theoretical Sciences. “It’s just that with this particular material, quality of sample and set-up that they suggested, it’s not possible.”

Janko and Kuno both emphasize that the quest to demonstrate laser cooling in semiconductors should continue among an interdisciplinary group of physicists, chemists, material scientists and engineers. They are currently working on realizing this using a different semiconductor material.

“We’re optimistic in the sense that this is a very interesting unsolved problem that deserves people’s attention,” Janko said. “And there’s no question that if this works, it’s going to have a huge impact on various applications.”

Being at Notre Dame, they added, enabled them to work as part of a close collaborative network, allowing them to consult and theorize with experts across multiple scientific disciplines.

“In the past, hard problems or grand challenges were often solved by a single researcher working alone,” Kuno said. “But in this day and age, what’s more likely to happen is that things or problems will be solved by teams consisting of people with different synergies and expertise.”

Their research was supported by the Air Force Office of Scientific Research. Additional authors on the paper include Yurii V. Morozov, Shubin Zhang, Anupum Pant, all of Notre Dame, as well as Seth D. Melgaard and Daniel A. Bender of Sandia National Laboratories, and Peter J. Pauzauskie of the University of Washington and Pacific Northwest National Laboratory.