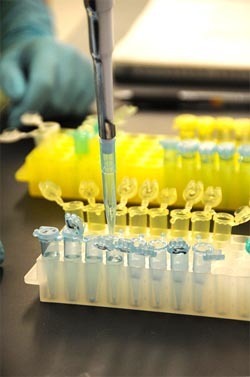 Eleven College of Science undergraduates gave oral presentations on their summer research projects and 34 gave poster presentations at the Fall Undergraduate Research Fair and Symposium on Thursday, Oct. 28 in the Jordan Hall of Science. The Research Fair also included opportunities to learn about research opportunities across the country, the Notre Dame Hub, the Center for Undergraduate Scholarly Engagement, clubs and other activities on campus.

Kimberly Schlesinger, a physics and English major advised by associate professor Morten Eskildsen, gave an oral presentation on her stuffy of critical current and vortex lattice properties in superconducting magnesium diboride, a type-II superconductor that has a “mixed state” of some magnetic induction and superconducting between upper and lower critical fields. Using small angle neutron scattering at Oak Ridge National Laboratory, Schlesinger mapped out the phase diagram of the material’s vortex lattice and took measurements of the magnitude of the field drop needed for a metastable state to transition back to the ground state. The behavior has applications in technology and engineering.

Daniel Corey, a mathematics and physics major, in an oral presentation described his work at the University of California—Santa Barbara with two other students to investigate the existence of solutions to modified Sylvester equations. They modified the Sylvester equation, a matrix equation whose conditions for solvability have been known since 1952, by transposing one matrix in the equation. The researchers confirmed a necessary condition of congruence and showed that it is sufficient when restrictions are put on the matrices.

Kristyn Jeffries, a biological sciences major advised by Dr. Patrick Fueger of Indiana University School of Medicine, gave an oral presentation on the effects of abating trefoil factor 3 (TFF3) on pancreatic islets. If TFF3 is a factor in spurring growth of beta cells, vital to insulin production, the research could help lead to treatment of diabetes. Jeffries’ study showed that withholding TFF3 caused a modest reduction in beta cell area in mice, although the mice were able to maintain insulin production perhaps because remaining beta cells increased production.

Ethan Ferguson, a biochemistry major advised by assistant professor Jennifer DuBois, gave an oral presentation on separation of heme biosynthetic precursors in chemically-induced porphyric rat livers. Porphyrias are disorders that disrupt the biosynthesis among its eight-step pathway. The study used Notre Dame’s mass spectrometry facility to separate up to 15 porphyrin precursors and their structural isomers.