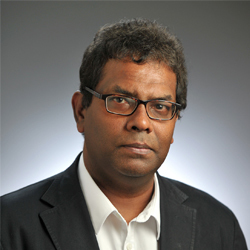 A collaborative modeling study among three research groups, including Edwin Michael’s laboratory in the Department of Biological Sciences, reveals that a triple-drug regimen could accelerate the elimination of lymphatic filariasis, a mosquito-borne parasitic disease also known as elephantiasis. The study, which shows that the regimen requires far fewer applications than current two-drug combinations, is also significant because it provides a unified scientific consensus on the subject for policymakers who sometimes face a confusing array of separate claims. An article on the work, “Effectiveness of a triple-drug regimen for global elimination of lymphatic filariasis: a modelling study,” was published in The Lancet Infectious Diseases in December. Authors, in addition to Michael, are Morgan E. Smith and Brajendra K. Singh of Notre Dame; Michael A Irvine and T. Deirdre Hollingsworth of the University of Warwick in the United Kingdom; Wilma A Stolk, of the Erasmus University Medical Center in Rotterdam, Netherlands; Swaminathan Subramanian of the Vector Control Research Centre in Puducherry, India; and Gary J. Weil of Washington University in St. Louis.

More than 1 billion people worldwide are at risk of contracting lymphatic filariasis, which can lead to grotesque swellings in the body and impede the victim’s social and economic activity. Few countries are on track to meet the World Health Organization’s longstanding goal of eliminating the disease by 2020, although mass drug administration (MDA) of the current two-drug regimens has reached 100 percent of the population in 22 nations. Trials of the three-drug regimen, funded by the Gates Foundation, have found that it is safe and highly effective. The foundation funded the modeling initiative in an effort to provide clear choices for policymakers regarding how best to use these drug regimens to break disease transmission in populations.

The models reveal the connection between the level of infection in humans and the level of transmission of the parasitic worms by mosquitoes. Adult parasites in the human produce microfilaria that mosquitoes take during blood meals. When the microfilaria have developed in the mosquito to a certain larval stage, the mosquito’s bite infects a new victim. When the level of human infection drops below a threshold in the population, transmission is interrupted because there are too few microfilia and the disease is eliminated.

The researchers used three different transmission models to gauge the number of rounds of MDA necessary to bring the level of microfilaraemia below 1 percent using a combination of ivermectin, diethylcarbamazine, and albendazole compared to the two-drug combinations now in use. The three-drug combination required fewer treatments in each case, and made an even greater difference when the infection level in the population was high. These results indicate that the three-drug regimen could provide an effective new tool for accelerating the elimination of lymphatic filariasis.