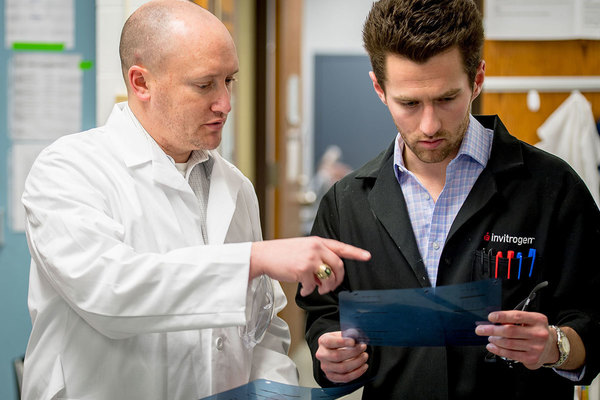 The findings, published Feb. 19 in Nature Cell Biology, demonstrate that the enzyme RIPK1 decreases the number of mitochondria in a cell. This loss of mitochondria leads to oxidative stress that can potentially kill cancer cells, though researchers speculate the cancer cells could find ways to shut down this effect.

The team included lead author Mark Hawk, a fourth-year doctoral student in the Biological Sciences Graduate Program. During the study, they discovered that when the enzyme RIPK1 is activated in a cell, it can cause the number of mitochondria – considered the “power plants” of the cell – to decrease as the cell consumes its own components for energy. This process is called mitophagy. This was surprising, given RIPK1 was well known to regulate necrosis, a completely distinct cell death mechanism.

“We really thought this was going to be a story about necrosis, but we weren’t able to see evidence of it, and knew there had to be something we’re missing,” said Zachary Schafer, Coleman Foundation Associate Professor of Cancer Biology in the Department of Biological Sciences and senior author on the study. “Looking at mitochondrial number fundamentally changed our thinking, and got us focused on a different way that RIPK1 may cause cells to die.”

“We found something potentially very important, and also quite novel,” Schafer said about the discovery.

Schafer’s lab focuses on metastasis, the process by which cancer cells leave the primary tumor and disseminate to other parts of the body. A barrier to cancer cell metastasis is cell death. Cell death can be induced when epithelial cells, those which line the surfaces of body cavities, detach from the meshwork of scaffolding-like proteins called the extracellular matrix (ECM). As a tumor progresses, it can become resistant to this type of cell death.

“While our findings are in their infancy, we hope we can take advantage of the liability associated with RIPK1’s function in order to design a strategy aimed at eliminating ECM-detached cancer cells, which would ultimately improve patient survival,” Hawk said, adding that more studies are needed to delineate which cancer types are most susceptible to this approach. 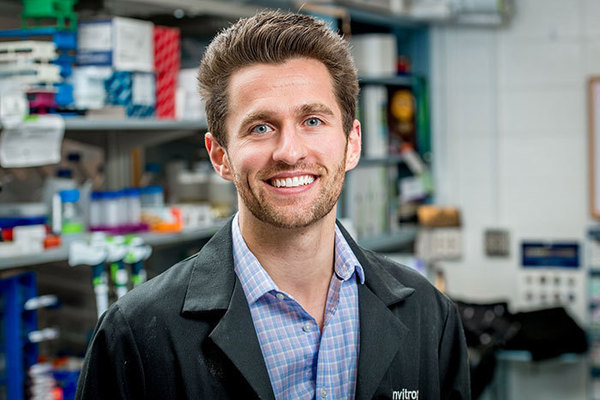 “I am tremendously proud of Mark for his efforts on this manuscript. This discovery is a credit to his diligence, resourcefulness, and innate aptitude. It is really gratifying for me to bear witness to his scientific growth and for it to ultimately result in such an interesting discovery and superb publication,” Schafer said.

The research was supported by a Lee National Denim Day Research Scholar Grant from the American Cancer Society, a research grant from the Phi Beta Psi National Project, a Graduate Research Fellowship from the National Science Foundation, and funds from the Coleman Foundation.