Mosquito bites can be an itchy nuisance but they can also be deadly. Diseases such as malaria, Dengue fever and West Nile virus can spread with a single bite. 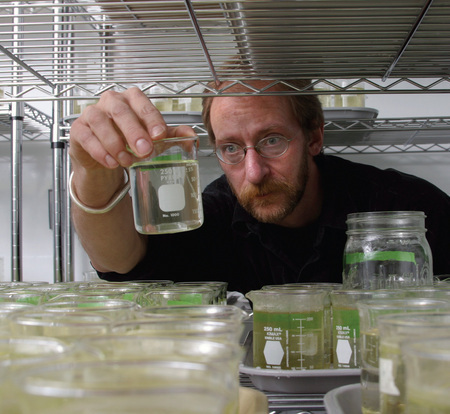 Understanding the genetic variation — identifying those genes that differentiate biters from non-biters — is the first step toward discovering new approaches to mitigating a mosquito’s tendency to bite, while still allowing populations to reproduce and survive in their environments.

According to a new study in the Proceedings of the National Academy of Sciences, researchers have taken a first step in identifying gene variation in biting and non-biting mosquitoes.

“Populations of some mosquitos vary in their propensity to bite,” said Michael Pfrender, director of the Genomics & Bioinformatics Core Facility at the University of Notre Dame, which processed the genetic data for the study, and a professor in the Department of Biological Sciences and at the Eck Institute for Global Health. “As soon as you have that variation you can exaggerate it through selection experiments.”

Experiments led by researchers at the University of Oregon, focused on Wyeomyia smithii, known as the pitcher plant mosquito. Out of 21,618 genes, the team isolated 1,380 which they found to be directly related to biting and non-biting. Of those genes, 902 were identified as relating to biting and blood-feeding, and 478 were linked to non-biters.

“By leveraging variation in the tendency to bite within and between populations of this mosquito, we are able to identify a set of genetic pathways associated with non-biting,” Pfrender said. “This study lays the groundwork to identify key regulators to these pathways that may ultimately provide tractable solutions.”

The pitcher plant mosquito has been of particular interest to researchers for some time. It is unique in that it is the only species to have both biters and non-biters — in southern populations of the species, the females bite while northern populations are non-biters.

Other mosquito populations consist of only biters or only non-biters. By focusing on W. smithii, scientists can study the genetic variation for biting and non-biting within a single species.

Understanding that divergence, researchers say, is a starting point to determining whether there are non-biting genes in other species that could be manipulated in order to reduce transmission of vector-borne diseases.

While studying W. smithii, researchers found that biters tend to rely on olfactory cues, while non-biters rely more on visual cues. Researchers also found that both biters and non-biters activate metabolic pathways necessary for taking a blood meal — but something stops the non-biters from taking the bite. Key proteins involved in metabolic processes like fatty acid synthesis and energy production are being produced in both biters and non-biters, but the linking enzymes that determine which metabolic pathways are turned on are missing in the non-biters. “The car is gassed up and running at the intersection but the light is red,” Pfrender said.

Stopping at this flexible point in the metabolic pathways is unusual and Pfrender said he hasn’t seen this in any other study. Researchers plan to study additional species including common house mosquitoes, which can spread encephalitis, West Nile and heartworm; Asian tiger mosquitoes, known to carry Dengue fever, Zika and yellow fever among other viruses; and Anopheles gambiae, which carry malaria.

Research was funded through grants from the National Science Foundation.

Originally published by Jessica Sieff at news.nd.edu on December 19, 2017.