Biochemist Brian Baker was struck with an idea for potentially treating cancer when he considered the relationship between a type of treatment being tried on babies with blood cancers, and a molecule that attacked the hepatitis C virus in a liver transplant patient. 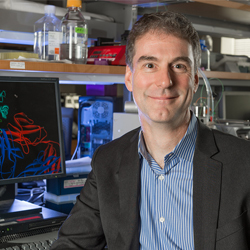 Baker, a researcher with the Mike and Josie Harper Cancer Research Institute and the John A. Zahm Professor of Structural Biology, along with graduate students Yuan Wang and Nishant Singh, launched into research with immunologists from Loyola University in Chicago to discover how molecules within T-cells (the subtype of a white blood cell responsible for sensing whether you’re healthy or have an infection) can specifically target certain cells to kill them.

The result of their research, “How an alloreactive T-cell receptor achieves peptide and MHC specificity" was published June 1 in the Early Edition of the Proceedings of the National Academy of Sciences of the United States of America. In addition to researchers at Loyola, the Notre Dame team also worked with researchers from the University of Nebraska, the University of Colorado School of Medicine, and the University of Kentucky.

Undesirable immune responses that occur with organ transplants historically have been believed to be caused when T-cells indiscriminately attack target cells. Research has shown, however, that often these immune responses aren’t indiscriminate and can actually be highly specific. Baker’s work shows how this can occur, and has implications for treating cancer.

In the majority of cases of transplant rejection, T-cells in the transplant patient’s body recognize the new organ as foreign, and attack it. In other cases, most often with stem cell or bone marrow transplants, T-cells within the donated tissue attack the recipient’s body. This is called graft-versus-host disease. While this can be deadly in adults, babies with blood cancers have been treated when clinicians intentionally create graft-vs-host disease. They transplant blood into the babies from mismatched donors, forcing an immune response against the cancer cells. This approach initially causes the babies to become ill, but eventually kills the cancer cells.

Baker’s lab studied a specific T-cell receptor (TCR), a molecule from a T-cell, that was cloned from T-cells originating from the donor liver of a transplant patient infected with hepatitis C. That transplant, which was also mismatched, resulted in graft-versus-host disease, but in an unexpected way: The donor T-cells attacked and killed only cells infected with the hepatitis C virus. Baker realized that if his lab could determine how that TCR specifically targeted cells infected with the virus, then he could possibly expand that discovery to the field of cancer immunotherapy. Identifying highly specific TCRs is crucial for cancer immunotherapy, because T-cells usually consider cancer as a "regular" part of the body and ignore it, allowing it to grow.

Baker found that the TCR from the donor liver focused closely on the MHC protein, a key protein in the immune system involved in signaling threats to the T-cells. However, the TCR from the donor also focused on a small molecule, or peptide, from the hepatitis C virus. The combined focus on both the MHC protein and the viral peptide is contrary to common expectations about how unwanted immune responses in organ transplants occur.

“This is really a serendipitous discovery,” Baker said. “We went into this hoping to understand some real fundamentals about how the immune system works, but very early on found this connection and application to cancer therapy. It really shows how basic research is crucial for solving big problems – we don’t know where the next discovery will come from or where it might take us. Helping to cure cancer by studying the immunology of organ transplants – what an amazing and exciting connection.”