On July 24, the Department of Physics and Notre Dame’s Physics Research Experiences for Undergraduates (REU) Program hosted the annual Physics Olympics in the Jordan Hall of Science. REU students from Michigan State, Purdue, and Notre Dame participated in the challenges. The Physics Olympics allows the REU students from these three universities to participate in friendly competition.

The contest included three main events to test the students’ physics knowledge and hands-on skills. From plastic straws, aluminum foil, and rubber bands, the students designed and built rafts. Ultimately, the rafts were then tested for the maximum amount of weight that each could carry without sinking. The students also built electromagnets from copper wire, nails, tape, and batteries. These closed circuits were then used to attract as many paperclips as possible, therefore testing the students’ ability to maximize the strength of their electromagnets. In the third event, the students simulated a miniature bungee jump using sandbags and rubber bands. The goal was to release the sandbags from the third floor balcony of the Galleria in Jordan Hall of Science, bringing them as close as possible to the awaiting buckets of water on the ground floor. Students considered the weight of the sandbag, the elasticity of the bungee cords, and the distance from the balcony to the ground floor, in order to have the most successful jumps. 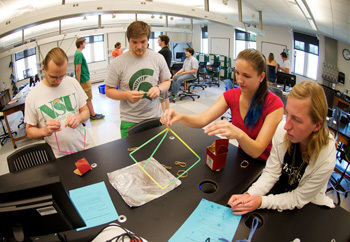 Umesh Garg, professor of physics and director of the physics REU program, oversees the Physics Olympics each year. He said of the event, “This year almost fifty students participated. It’s a fun event. The students had to use their knowledge of physics in some practical situations. They had to think on their feet. They had to have the mental agility and also the ability to work together, because we make teams, which are composed of students from all three universities. As much as they may or may not like each other on the football field, in physics they work together. Primarily, the aim is whether they can apply some of the things they have learned to very simple practical problems.”

The Physics REU Program, now in its 28th year of NSF funding, provides opportunities for undergraduate students to conduct research with faculty and graduate students and is open each year to rising juniors or seniors.