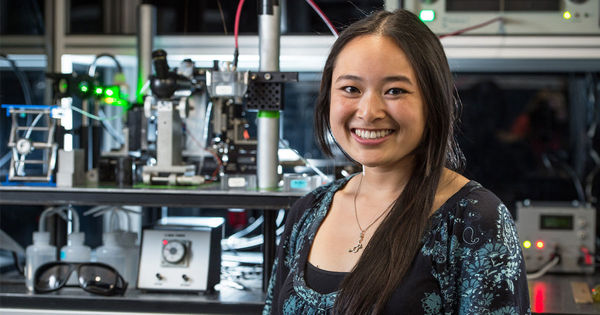 Chemistry graduate student Sarah Lum recently won the Young Scientist Award at the MSB 2017 conference, a gathering of scientists in the Netherlands that focus on microscale separations and bioanalysis. The Young Scientist Award was established to recognize researchers under the age of 35 in the field who set an outstanding example for other scientists. The award specifically recognizes Lum’s work on developing new forensics technology.

Lum has been developing a new instrument that will significantly reduce the time to process the results from a rape kit. “I work in an instrument development lab and am building a system to separate victim from perpetrator DNA in sexual assault kits. The national backlog of rape kits is estimated to be upwards of 500,000 with a three month turnaround time from collection to analysis,” Lum said. “Current methods take a week to process a single kit and my technology would drastically decrease this time.”

However, Lum’s graduate advisor, Norman Dovichi, believes that the award was well-deserved, praising Lum for her leadership, communication, and independence. “She recognized the need for improved forensic analysis of sexual assault evidence, she conceived of a solution to this problem, she gathered the resources necessary to generate preliminary data, and she presented her results to an international conference,” Dovichi said. “This level of independence is unprecedented in my experience and is highly valued.” Lum was very excited to receive the award, especially because of the competitive candidate pool that included faculty. “The award was quite humbling, very encouraging and definitely surprising! I was certainly not expecting it to go to a graduate student since every oral presenter under the age of 35 was considered,” Lum said.

While Lum has considered pursuing instrument development following her graduate studies, she is also interested in going into science policy to address the needs of the scientific community. “As I've interacted more with the forensics community, I've learned that there are better technologies available than are currently employed in the field,” Lum said. “We need communicators on the interface of these communities to promote and facilitate the adoption of advanced technologies and methodologies into the standard workflow of crime laboratories. This would allow us to utilize the best available techniques in processing casework and eliminating backlogs.”