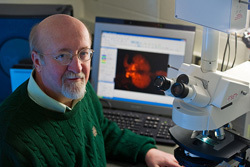 Researchers from the laboratory of Robert Schulz, the Notre Dame Chair of Biological Sciences, have discovered that common genetic factors control the fate of stem cells in the development of the reproductive system and the blood cells of the fruit fly (Drosophila melanogaster), a model genetic organism. Their work is published in the September 15 issue of the journal Development.

Previous work had identified a gene in Drosophilanecessary for the development of stem cells into mature gametes in Drosophila, which was called bag-of-marbles, or bam (named for the appearance of an overabundance of germline stem cells, present in flies with a mutation in bam). Schulz and his colleagues have now shown that bam is also crucial for maintaining the population of stem-like cells in Drosophila blood development, or hematopoiesis. In addition, they demonstrate that the fruit fly genes microRNA-7 and yan interact with bam to maintain the multipotent character of these stem-like precursor cells.

These findings not only add to the understanding of how flies build critical physiological systems; this work may also have significant implications beyond fly biology. Through recent sequencing of both the Drosophila and human genomes, we now know that many genes in the fruit fly have equivalents in humans. Thus, mutations in the human versions of these genes can lead to devastating diseases of the blood, such as leukemia, lymphoma, and myeloma. Experimenting with, and understanding how factors control hematopoiesis in the fruit fly could lead to significant advances in the study of human blood cell development.

“This is an exciting development in the field of Drosophila hematopoiesis,” says Schulz. “We have shown that factors that control stem cell maintenance and differentiation within the germline can also be implicated in the maintenance and differentiation of blood cell precursors. This information opens up a new way of thinking about blood cell homeostasis."